With a race victory and a second place finish at Snetterton 300, Cameron Horsman has reduced the gap between himself and the championship leader, Ogden to just 12 points with four races of the season remaining.

Having topped free practice, a damp track and heavy traffic hindered the Forest Hill rider with Horsman eventaully managing to put in the 4th quickest time in the dying moments.

Making a good start in Saturday’s race, Horsman managed the tricky conditions well to make up a place by the end of the first lap and set off in pursuit of pole man, Fenton Seabright who was making a break at the front.

Locked together with Scott Swann, Jack Nixon and the championship leader Scott Ogden, positions changed frequently with the 18 year old going from 2nd to 4th and back again in the blink of an eye. 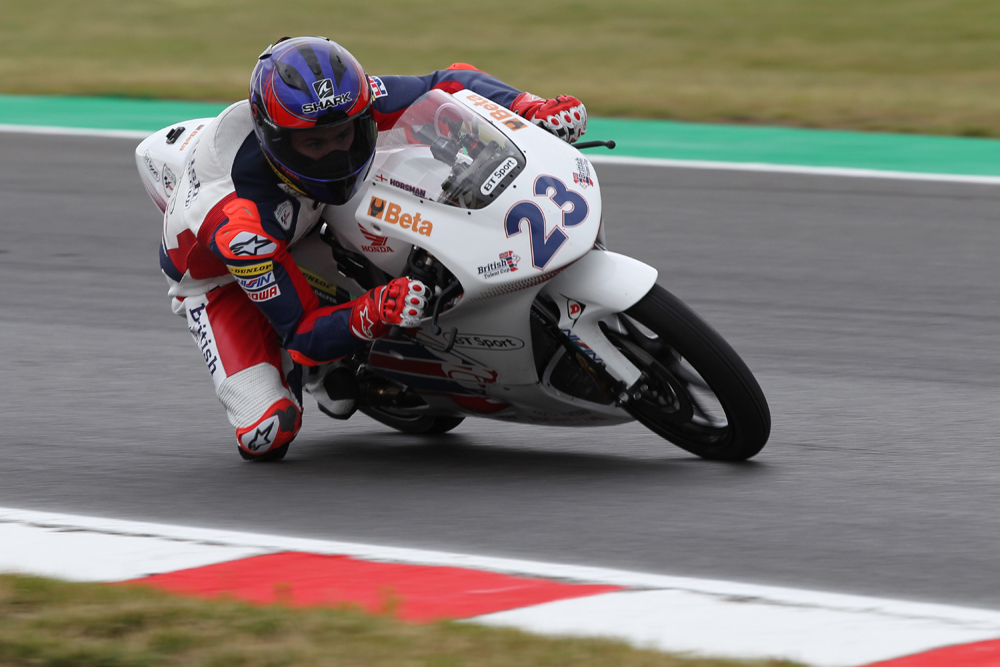 Drafting past Ogden on the final lap, Horsman put the hammer down to open up a slight gap and keep the Doncaster rider behind him to the flag to take 2nd place behind Seabright and close the gap to the championship leader to 17 points.

With good conditions for Sunday morning’s race, Horsman again made another good start to slot into third position behind Fenton Seabright and Brian Hart.

Well aware of Seabright’s abaility to disappear up the road, Horsman quickly moved past Hart into 2nd before overtaking the leader at the end of the Bentley straight with the pair able to stretch out a 5 second lead over the chasing pack.

With the two trading places, Ogden was able to close the gap to make it a three way battle for the lead.

Onto the final lap and Seabright drafted past Horsman in a classic move down Snetterton’s fast Bentley straight and looked set for a second win of the weekend before crashing out in spectacular fashion exiting the final chicane with the finish line in sight, handing Horsman a hard earned win with Ogden 2nd.

The win took another 5 points out of Ogden’s lead.

“It was great to get the win and these two results mean I have cut the gap between me and Scott. It is still a tall order, with just four races to go, but all we can do is think about our races, doing our best and trying to win as many as possible and see what happens. There’s not a lot of rest though as we are now up against each other in the British Motostar Championship at Thruxton and Cadwell Park.”

The next round of the British Talent Cup takes place in the Czech Republic at the Brno circuit 2nd to 4th August.