Another week and another Herne Hill Harriers young athlete is in the spotlight wearing an international vest.

This time it was at a major global championship event as Charlotte Alexander took on the World Cross Country Championship in Aarhus, Denmark and raced superbly as the youngest member of the Great Britain team in the junior women’s race.

Meanwhile one of the oldest athletes at the club, Allan Long became Harriers’ latest world champion when claiming the 60m gold medal for men over-75 (M75) at the World Masters Indoor Championship in Torun, Poland.

Aarhus staged a fantastic world cross meet with one of the toughest and most innovative courses ever seen in the sport, featuring hills, including one on the roof of a museum on each lap and other very testing attributes both man-made and natural.

Alexander finished an excellent 49th position, which saw her as the fourth team counter for the Great Britain team who were seventh in the junior women’s race.

She was the first U18 European to finish (in a race forU20s), was 10th U18 woman of all nationalities and the eighth U20 European. The GB U20 women’s team was the first European team in a championship with a recent history of dominance by the African nations.

She will still be eligible for this same age group when these championships will be held in Australia in March 2021.

In Poland, Long was crowned as a world champion at the Masters Indoor global track and field meet. Long won the M75 60m final by a clear margin in 8.91 seconds, the culmination of a hard winter’s training with these championships as his goal. 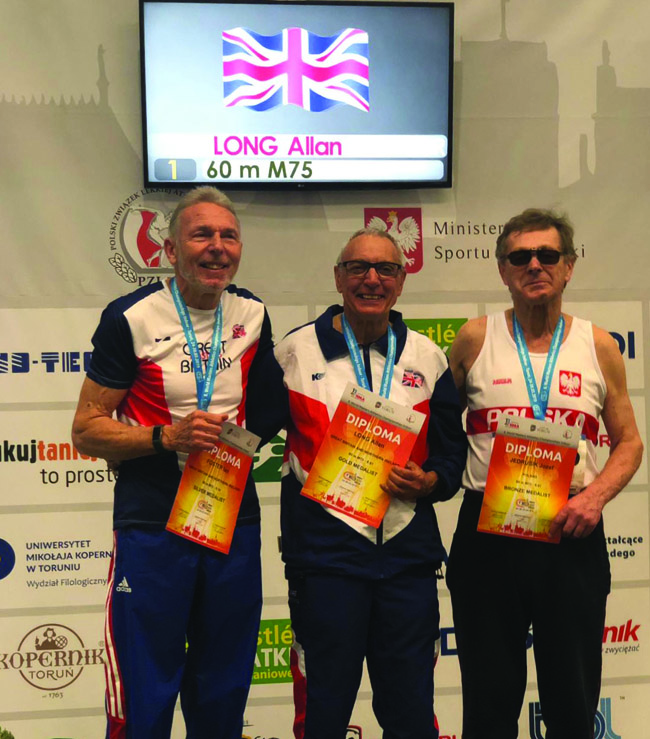 A couple of days later, he followed up his 60m gold in Poland with silver in the 200m. He produced season’s bests in both his heat and the final but was beaten in both races by American Larry Barnum. Their respective times in the final were 29.73 and 30.10. So following Fiona de Mauny’s gold and silver at the outdoor Masters world champs in Malaga last September, Herne Hill now have another athlete to bring home world gold and silver medals.

Nearer home, Myles Preston showed he is reaping the benefits of a good training regime as he ran a good 79.10 to place third in the Croydon Half Marathon on Sunday over a challenging course, running a well-paced race which saw him closing in on the two men in front of him in the final stages.

This Saturday sees the National Road Relay Championship at Sutton Coldfield where South of England women’s champions Herne Hill will be looking to build on their recent excellent team victory.