Another of the club’s youngsters was selected to represent the UK in this weekend’s European Junior Championships in Sweden.

Several athletes will be turning out for Surrey in this weekend’s South of England U17 inter-counties match at Chelmsford on Sunday. 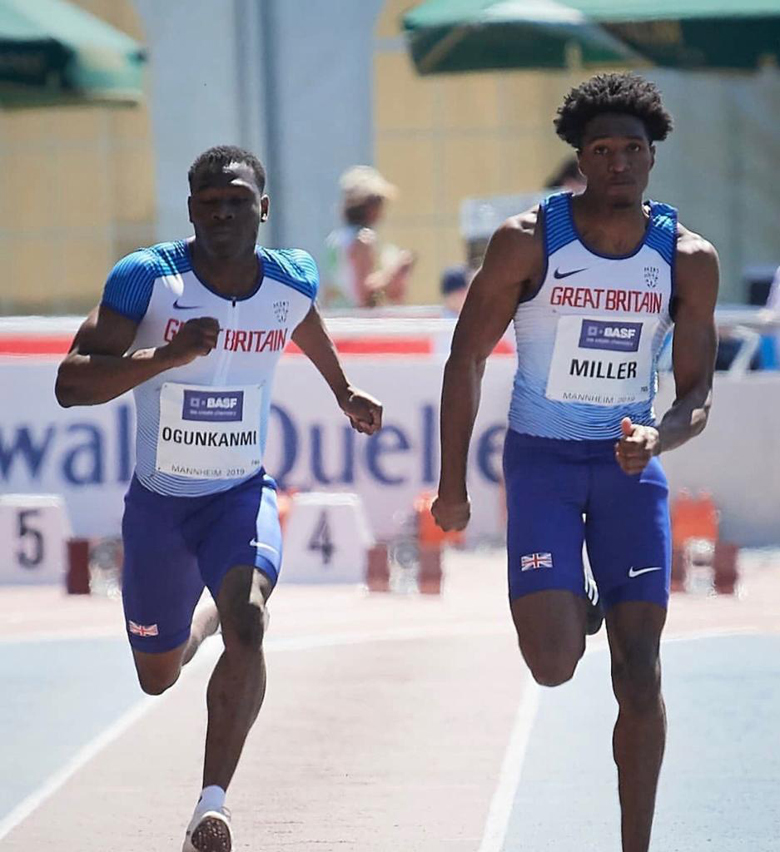 Chad Miller is competing for Britain in the 100m and 4x100m relay in this weekend’s European junior championships in Boras, Sweden. He is following in the footsteps of his older brother Rechmial, who represented Britain in the 2017 European championships in Italy. Chad clinched his place in the team with a fine 10.43 seconds effort in an international meeting in Germany last month.

Teenager Freddie Arkell will be representing England in the Home Countries Schools international in Swansea on Saturday after taking the junior boys 100m silver medal at the English Schools Championships in Birmingham in a lifetime best of 11.18 last weekend. It ranks him second in the UK for his age group this season. He also tops the 200m rankings.

International 400m runner Dwayne Cowan turned out to support the club’s track and field team at Worthing and ran a superb opening leg of 48.1 for the mixed 4x400m relay team. He linked up with Rebekah Riches, Jaleel Roper and Rebecca Afriyie to set the team on the winning road. It clocked  a swift 3:45.0 seconds, just outside the divisional record, to win by a massive 15 seconds.

Hercules Wimbledon dominated the men’s endurance events with Tom Jervis winning the 1,500m A and 3,000m B races, Justin Reid the 1,500m B and Finn Johnson the 3,000m A race. Nicholas Thomas and Jamie Bannister won the 3,000m steeplechase A and B races. Mark Andrews and Lance Power gained maximum points in the sprint hurdles while Andrews also won the 400m hurdles A race.

All-rounder Andrews competed in nine individual events. He also won the discus A and triple jump B, took second in the high jump A and shot, hammer and javelin B events and third in the pole vault A.

Throwing exponent Sam Hitchings won the shot A and was second in the hammer A and discus B.
Devonte Casely-Hayford, Roper, Armani Thomas and Facey linked up to win the 4x100m relay.

Hercules Wimbledon are top of the Division Three South East table – the only unbeaten team in the division. Short of a disaster in the final match at Tooting Bec next month, they are certs for promotion.

Sprinters Rechmial Miller, Theo Etienne and Facey head the Hercules Wimbledon contingent competing in the England senior championships at Bedford this weekend, which also incorporate the UK Inter-Counties Championships. Weir runs the 3,000m for Surrey in Sunday’s U17 inter-counties meeting at Chelmsford.