A week after finishing runners-up in the Surrey championships, Hercules Wimbledon Athletic Club’s senior men’s team put in a strong performance to post the top Surrey team performance in the South of England six-stage road relay championship at the Crystal Palace National Sports Centre on Sunday.

The team started steadily with Fred Slemeck handing over in 30th place at the end of the first lap, covering the 6.1km traffic-free circuit in 17 minutes 37 seconds. Despite clocking a slightly slower time of 17:40 on the second leg, Ross Franks managed to move through to 21st place. Jonny Cornish ran a storming third leg in 17:00, the fastest Hercules Wimbledon time of the day, passing nine runners and handing over in 12th place.

Newcomer Alex Milne, making his Hercules Wimbledon debut, moved up to ninth place clocking the second fastest Hercules Wimbledon time of 17:10. Marathon man Richard McDowell passed two runners in clocking 17:19 on the penultimate leg before Charlie Eastaugh, making his debut in the Crystal Palace event, edged up to sixth place with 17:31 fending off the anchor leg Kent AC runner by the thickness of a vest. Hercules Wimbledon’s total time of 1:44:18 was just over three minutes behind winners Aldershot, Farnham & District. 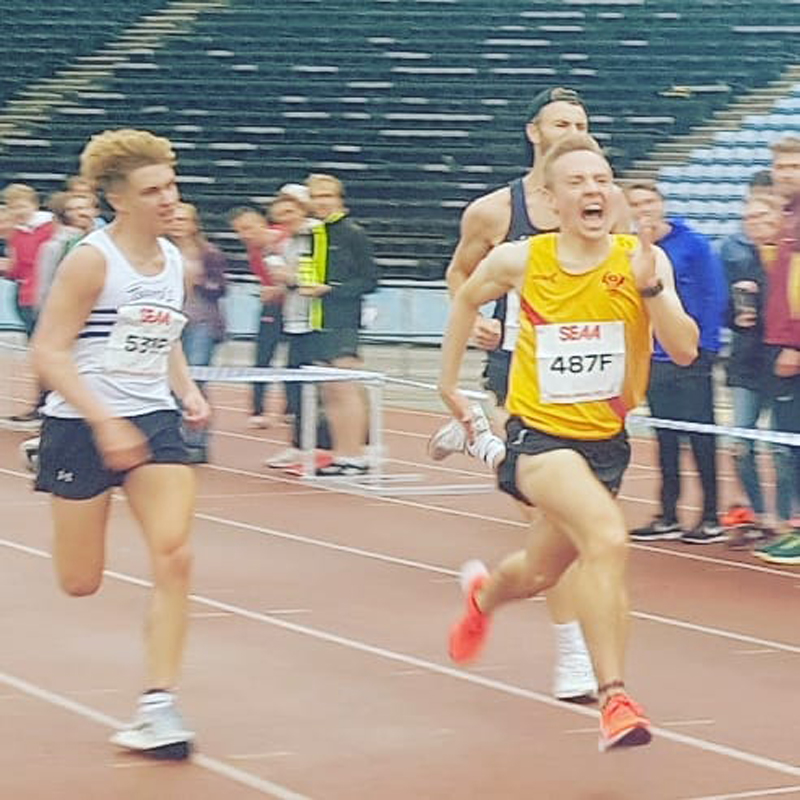 Hercules Wimbledon’s B team also qualified for the English national road relay championships at Sutton Park on October 5 by finishing 23rd in 1:48.59, ironically being edged out of 22nd place by Kent AC, again by less than the thickness of a vest.

Double Surrey road relay medallist veteran Dimos Evangelidis ran the second leg for the B team covering the 6km in 18:10, moving though from 48th to 36th place on the second leg after Tom Drayton clocked 18:32 on the opening stage.

Then came the fastest Hercules Wimbledon B team time of 17:58 posted by Finn Johnston in moving through to 33rd place. Joe Clark (18:28) gained a further six places before Tom Jervis (17:20) moved through to a national championship qualifying place of 23rd which was held by David Lewin (18:32) on the anchor leg finishing three places ahead of the Surrey title-holders.

The girls U15 trio of Lulu Weisz (fourth in 11:31), Millie Doyle (seventh in 12:15) and Millie Thorpe (seventh in 12:09) were the best of the young athletes teams from the club, finishing seventh out of 49 teams  and second from Surrey. The club also fielded a B team of Eloise Davies, Bailey O’Leary and Anya Montgomerie which finished 42nd. Davies clocked the fastest time of 12:18.

Supervet Lisa Thomas was the fastest member of the senior women’s team. She clocked 18:41 in gaining 10 places on the final lap. Fellow superset Alison Purnell was second fastest clocking 20:59 in gaining four places on the penultimate lap.

Alex Milne warmed up for Sunday’s run by headed home a 605-strong field in the Wimbledon Common 5km parkrun on Saturday in 15:54, more than three minutes ahead of the runner-up. Lisa Thomas was second woman in 20:47.

David Grima clocked 19:08 in winning at Wotton while Will Woodcock made it a hat-trick of Hercules Wimbledon wins by heading home the 542-strong field in Bishop’s Park, Fulham, in 15:54.