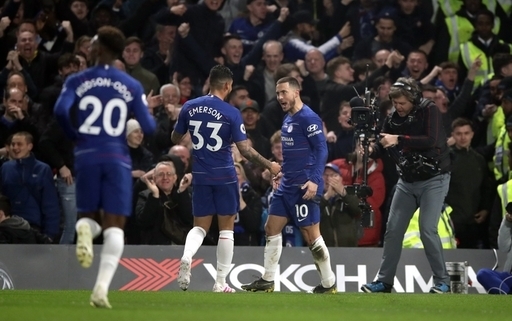 BY CRAIG HOUSE at Stamford Bridge

The mercurial Hazard opened the scoring after 24 minutes when he effortlessly weaved through the West Ham defence from 25 yards out to tuck the ball past Lukasz Fabianski’s left post.

He topped off a man of the match performance with a fine volley that beat Fabianski at his right post on the 90th minute after Ross Barkley found him in the box.

Hazard, who’s scored 19 goals this season, proved a constant threat for West Ham and on the 28th minute there were calls for a penalty when the Belgian was seemingly barged in the box by Marko Arnautovic.

It appeared the ball was glued to Hazard’s feet at times and the playmaker constantly found crucial passes and found his way through the West Ham defence.

Callum Hudson-Odoi, who got a start under Maurizio Sarri for the second match running, forced Fabianski to palm the ball over the crossbar after he caught the Hammers on the break on the 40th minute.

Chelsea had multiple chances to punish the away side in the first half and the visitors managed just one shot on target.

West Ham fought back with some chances of their own in the second-half, notably Manuel Lanzini’s shot on the 54th minute which forced Kepa Arrizabalaga to save to his left-hand side.

Chelsea had further chances in the more evenly contested second-half, Ruben Loftus-Cheek found himself one on one against Fabianski but fired tamely into his hands.

Chelsea could have doubled their advantage on the 78th minute, a Hudson-Odoi cross narrowly escaped substitute Ross Barkley who couldn’t tap in.

Hudson-Odoi made way for Pedro on the 84th minute after another impressive display from the 18-year-old. Olivier Giroud and Ross Barkley also got some minutes on the pitch when they replaced Loftus-Cheek and Gonzalo Higuain earlier in the match.

Giroud was unlucky not to score on the 86th minute when he found himself facing Fabianski but the busy keeper managed to push the ball on to the roof of the net.

There was mounting Chelsea pressure in the dying moments of the game before Hazard ensured the Blues secured all three points.

Chelsea made two changes from the team that beat Brighton last Wednesday with Andreas Christensen replaced by Antonio Rudiger and Olivier Giroud replaced by Gonzalo Higuain.

West Ham welcomed back Fabian Balbuena from a lengthy injury and Chicharito, who has a good scoring record against the Blues also started.

Chelsea are next in action on Thursday night when they take on Slavia Prague at home in the first leg of their UEFA Europa League Quarter-final match.

The Blues next game in the Premier League is against current league leaders Liverpool at Anfield on Sunday.