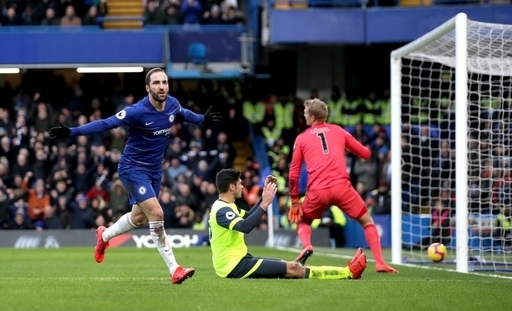 Chelsea recovered from the embarrassment of a 4-0 rout at Bournemouth in midweek thanks to a brace apiece from Eden Hazard and Gonzalo Higuain and an late header by David Luiz as they thrashed bottom of the table Huddersfield Town 5-0 at Stamford Bridge this afternoon.

The Blues return to fourth place in the Premier League and it was the Hazard show again as he turned on the style, linked brilliantly with Higuain and generally showed just why he is coveted by the likes of Real Madrid.

In truth this was the perfect team to play against after the midweek debacle but at least the put the visitors to the sword. Last season in the corresponding fixture the Terriers got the point that sealed their survival in the Premier League. This time they are destined for the drop and got all that their limp performance deserved – nothing.

Ross barkley had the first attempt goal wards on three minutes. Latching onto a loose ball, he tried a 25-yard daisy-cutter but he screwed the ball wide of Jonas Lossl’s right post.

But seconds later a Philip Billing inspired move saw Aaron Mooy almost put the visitors ahead with a powerful header after he out jumped Andreas Christensen.

Thankfully for Kepa Arrizabalaga, the ball inched over this crossbar.

A scuffed half volley by striker Gonzalo Higuain almost reaped dividends, but defender Christopher Schindler managed to deflect the ball away for a corner.

Persistent pressure by the Blues finally broke the Terrier’s resistance.

On 17 minutes following excellent interchange play, N’Golo Kante produced a defence-splitter ball with the outside of his right boot, into the path of Higuain, who smashed the ball home from eight yards out.

Huddersfield made an enforced change with Isaac Mbenza injured, on came Steve Mounie on 28 minutes.

David Luiz should have put the game out of Huddersfield’s reach on 34 minutes. But his unchallenged downward header was wide of the mark.

Seconds before the break Cesar Azpilicueta raced towards the Terriers’ penalty area. Challenged by Elias Kachunga the right back fell to ground and referee Paul Tierney pointed to the sport.

Up stepped Eden Hazard to ram the ball home to double the lead.

There were no further changes at half-time by either side.

Willian had the first effort within three minutes but he skied a curling left-footer from just inside the visitor’s penalty area.

Billing tried his luck from long range, but Kepa easily dived to his left to smother the low drive.

Kachunga though he should have. Had a split kick on 55 minutes when Christensen saw out the ball for a goal kick. The striker fell to the ground, clutching his ankle suggesting a clip from the Danish defender. But referee Tierney ignored the plea.

hazard finished the game off as a contest on 66 minutes – Jorginho passed to the Belgium on the left, he raced clear of the static defenders, rounded Lossl and slotted home from a tight angle.

A beauty of a fourth two minutes later from Higuain from 25 yards out lifted they rafters off the Stamford Bridge crowd. The curling right footer took a wicked defection Terrence Kongolo bit the power and dip was all of the Argentina striker’s maker and the ball sailed over Lossl and into the back of his net.

Maurizio Sarri then replaced Jorginho with Mateo Kovacic. He was quickly followed by Callum Hudson-Odoi – man of the match Hazard made way.

Ruben Loftus-Cheek got the last eight minutes on the pitch at the expense of Kante.

Luiz finished off the visitors with a powerful header, four minutes from time that, while goal-bound, took another deflection past Lossl. This time the hapless offender was Kachunga.

Next up for Chelsea is an away trip to Manchester City next Sunday.