Brad Quinton was keen to see how his team would bounce back after a disappointing defeat at home to Slough Town on Saturday and will have been delighted with the reaction.

Had it not been for the hosts’ goalkeeper Henry, on loan from Crystal Palace, the Wings would surely have returned home with all three points.

Nathan Green had the first chance of the match when he burst through following Dipo Akinyemi’s flick but Henry was out quickly and gave him nothing to aim at – Green shot wide of the near post.

Ryan Hill’s free-kick didn’t bother Welling goalkeeper Dan Wilks but he was called upon to turn a Dean Inman header from Kyron Farrell’s long throw around the post. Sam Deadfield delivered the corner and Inman got up but headed wide. 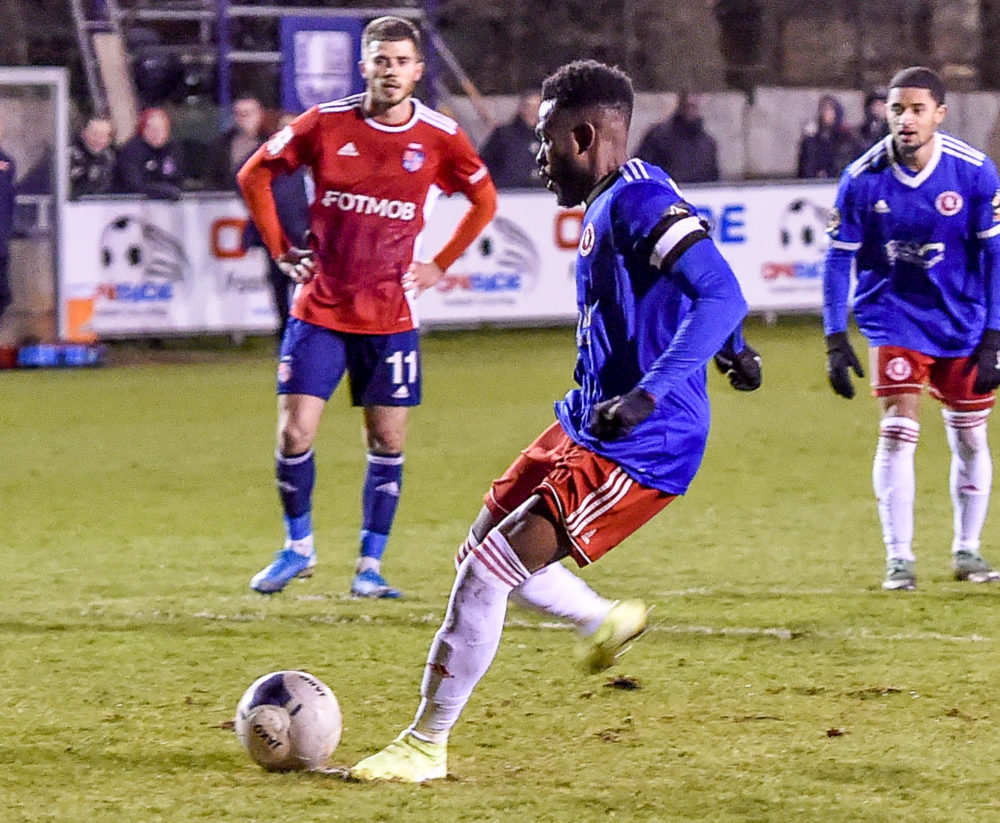 Luke Ruddick handled in the area and Adam Coombes stepped up but Henry went the right way and made a superb stop.

He  made an even better save when Akinyemi twisted and turned and shot low.

Wilks save a 30-yard effort from Ruaridh Donaldson confidently and both Hill and Jake Gray fired over from outside the box so it came as a surprise when Hampton went ahead just before the break. Deadfield got to the byline and pulled it back for Muir to finish from close range.

Immediately after the interval, Romoney Crichlow-Noble fired over for Welling after a corner was only half cleared before Hill headed over at the other end.

Henry made a good save from Crichlow-Noble’s header before making another brilliant one to keep out Diaz Wright with his feet. His luck ran out when it came out to Chiori Johnson and as he burst forward he was brought down and another Welling penalty was awarded.

Captain Anthony Cook took the responsibility this time and Henry was unable to get near his 12-yard finish.

After that, as hard as the two teams tried, neither was able to muster an opening and the spoils were shared.