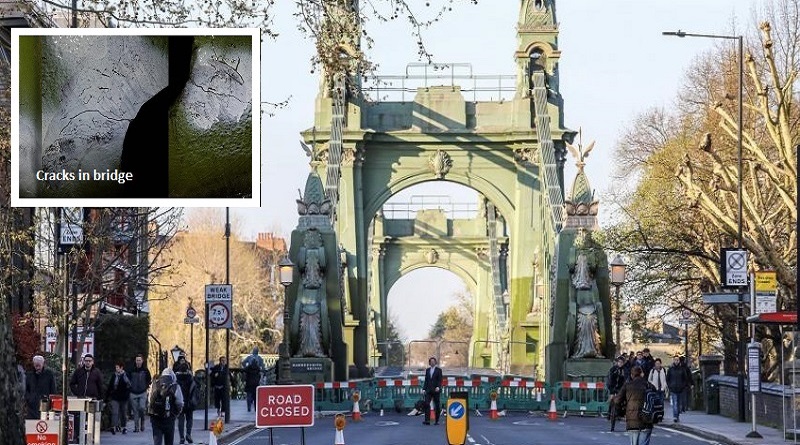 Repairing Hammersmith Bridge will cost up to £120 million and take about three years, it has been announced.

The Grade-II listed, 132-year-old crossing closed to vehicle traffic in April, after surveyors found cracks in its iron structure. Work to assess the extent of the disrepair and the work needed to restore it has been ongoing.

“The bridge is not only a beautiful example of innovative 19th-century British engineering, it’s also a vital 21st-century river crossing.

“It can be made fit for purpose for generations to come. That’s what we’re doing and we’re focused on getting the bridge reopened to cars and buses as quickly as possible.”

A statement from the council said the £120m price tag was an “early stage estimate” and includes a “contingency due to the unknowns”.

The council also said £21 million has been committed to the first stage of the repairs.

The council has repeatedly said that the Victorian bridge was never designed to carry the weight of multiple buses and thousands of cars each day.

In April, several micro-fractures were found in the iron pedestals that fix the suspension bridge into the ground.

It was feared that the micro-fractures could cause the whole pedestals to shatter under too much weight. This led to the decision on April 10 to ban all vehicle traffic indefinitely, with only pedestrians and cyclists allowed to cross it.

The huge bill comes as TfL continues to grapple with an enormous annual spending deficit.
In March, TfL announced that its operating deficit for 2019/20 had been revised down to £742 million, from £897 million.

The council’s statement said it and TfL were “continuing to explore the most appropriate funding route for the main construction”.

Mr Cowan and London Mayor Sadiq Khan had called on the Department for Transport (DfT) to help fund the repairs.

A DfT spokesperson said it still had not received a formal request for funding from the council or TfL, which spent £5.3 million on minor repairs of the bridge from 2015, and about £900,000 over four years on hiring wardens, who failed to control the number of buses crossing the bridge.

Immediately after the bridge closed, the council said the wardens’ failure to limit the bus traffic had put too much weight on the bridge’s pedestals, and weakened its structure even more.

It was also reported earlier this year that a major repair job, budgeted at £27m, was due to be carried out on the bridge in 2016. Those works, ― which included replacing corroding bolts, resurfacing, and repainting were postponed to late 2017, but never took place.

The council’s new statement also said that, once reopened, TfL will continue to limit the flow of buses over the bridge.