Roy Hodgson and his Crystal Palace players can reflect on a very decent Christmas period that has eased  relegation worries and put them into the fourth round of the FA Cup. Santa’s sack was full of surprises  – for players and fans in SE25 alike.

A rocket from Andros Townsend, new shooting boots for Jordan Ayew and a win at the Etihad. Father Christmas was pretty generous all told, with only the Chelsea home performance looking like the batteries were a little low on power.

Ten points from a possible 15 in the Premier League is a very reasonable return, particularly when you consider that Chelsea and Manchester City featured in the run. So what have we learned during the period?

Strikers are all about confidence

Jordan Ayew has been in and out of the Eagles’ line-up this season. Although the Swansea loanee has been hard-working, he has struggled for goals.

That all changed with a terrific first touch and finish at Molineux last week and he followed up by finding a last-gasp winner against a resilient Grimsby at Selhurst Park on Saturday evening.

I have said previously that Ayew may be best used as a number 10 or a wide player – in order to maximise his abilities. It will interesting to see if he is given the opportunity to fill either of these roles with the return of Christian Benteke, a fully fit Connor Wickham, or even a new number nine.

On the other hand, Alexander Sorloth’s loan to Gent may be in the interest of all parties. 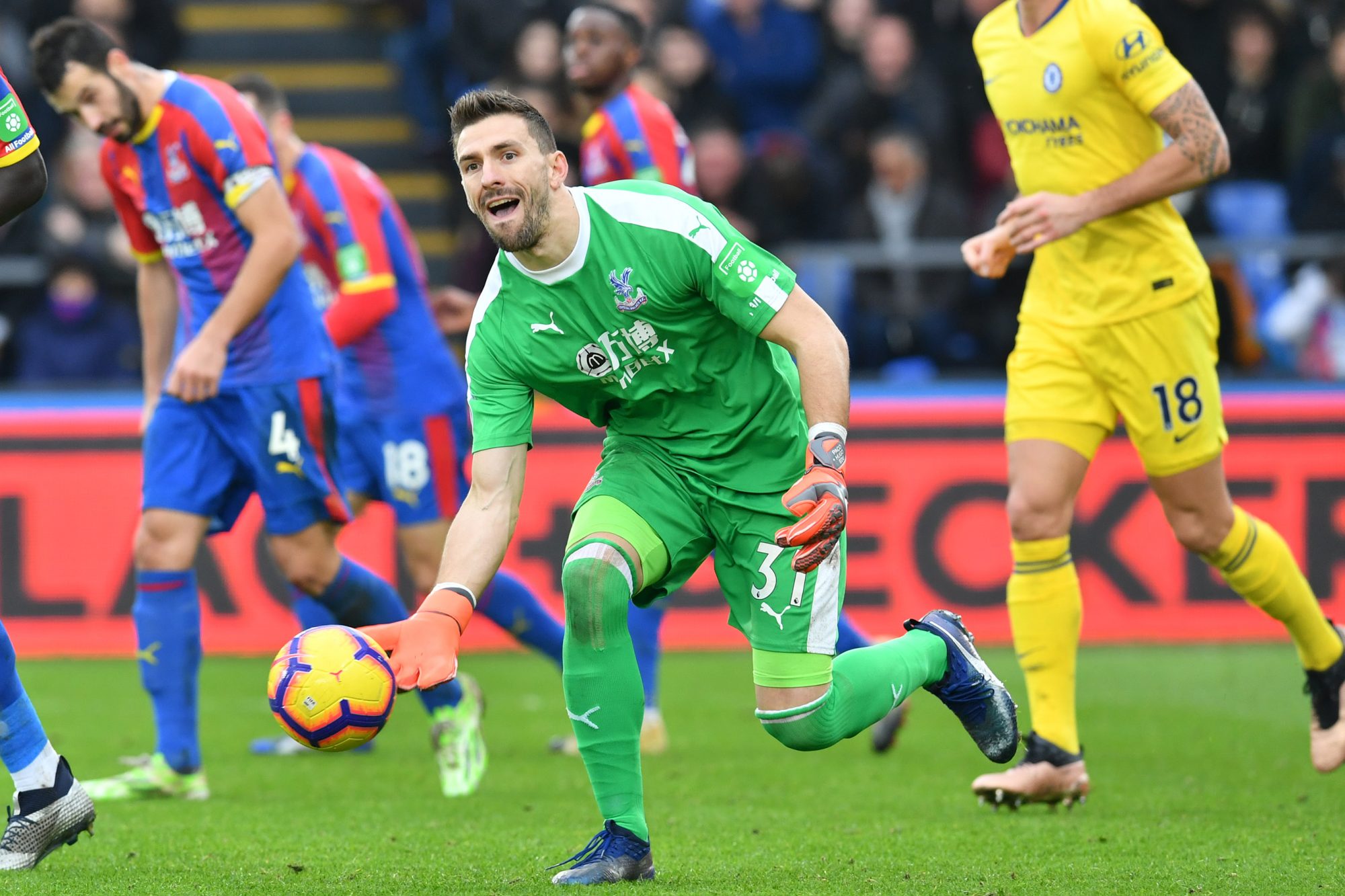 Vicente Guaita pulls out the stops

The Spaniard has kept five clean sheets in eight appearances in all competitions and has been able to pull out big saves when needed – often after long periods of inactivity.

The home games against both Leicester City and Cardiff City have underlined this quality and Guaita has gained three points for his team in these two fixtures.

This is a great sign that his concentration levels are spot on, and a trait of a top-class goalkeeper.

The talk these days seems to always be about distribution, but I am a believer that a goalkeeper that makes 20 saves per season he is not entitled to, is the equivalent of a 20-goal a season striker.

Whatever the “modern day goalkeeper” is all about, goalkeepers that make saves that they aren’t supposed to will win points for their team. Guaita is well in credit in this respect and may prove an excellent acquisition.

Regular readers of this column will know that I jumped to the defence of the former England manager after defeats at Brighton & Hove Albion and West Ham United. Harshly criticised by many, those were left eating their terse words along with the turkey and mince pies over Christmas.

The lack of substitutions or a willingness to change shape have been used as a stick to beat Croydon’s favourite son with, but again the Palace boss has surely blown away the criticisms thrown at him by the “FIFA 19” playing brigade.

Hodgson has demonstrated his willingness to adapt his team shape according to the opponents and the challenges faced. There appears to be a feeling among the fanbase that 4-3-3, with Max Meyer pulling the strings in central midfield, is the only way.

This approach is incredibly naive, as demonstrated at the weekend when the German was afforded the role for the visit of Grimsby but was pretty anonymous during his audition.

There is no doubt the playmaker has ability, but those calling for his constant inclusion are basing this on his reputation, rather than his contribution so far.

It’s still early days, but I think he may find it difficult to become a regular fixture.

Palace are no soft touch under Hodgson and the diligent work carried out on the training ground week to week has provided a platform for success in spite of the team lacking a real cutting edge at the top end of the pitch.

The manager has certainly not been afraid to adapt personnel and shape according to the opponents and his thorough approach has reaped dividends.

The use of Jeffrey Schlupp in the Manchester City game certainly raised eyebrows and the victory was a triumph for what Hodgson is all about.

A team that was able to restrict City’s free-scoring, rampaging attack to a few attempts on goal really underlined the manager’s know-how and just how well thought of he is by those who are students of the game. I understand that such was Pep Guardiola’s respect for Croydon boy Roy, that the City boss spent more time on his opposition analysis prior to the game than any other opponent this season.

It’s horses for courses and Hodgson’s formation changed again for the Cardiff game, with the home side having a massive 31 attempts on goal without scoring, eclipsing the 29 against Burnley at the beginning of the month.

If there should be any dissent, then the Chelsea game was a disappointment, where perhaps playing two up may have given David Luiz a more uncomfortable afternoon, as had happened the previous season, though equally may have led to a heavy defeat. A momentary lapse from Patrick van Aanholt was ultimately the difference between the two teams.

Perhaps the strangest thing for me was at Molineux. With the game on a knife-edge at 0-0, I for one would have been happy with a decent point, though again the Eagles would have deserved more.

There is no such thing as a bad point on your travels in the Premier League, so I was somewhat surprised to hear fans clamouring for changes. The fans who chanted “Hodgson, Hodgson, make a sub” were forced to quickly change their song choice to “he scores when he wants…” after Ayew hit the back of the net. It was a fantastic, well-deserved away victory against a top team.

Make no mistake, Palace are very lucky to have Roy Hodgson at the helm. In fact, I would say of all the managers employed by Steve Parish since the return to the top flight he is the best.

The backroom team he has put together reflect his character and work ethic  too.

Ask any football person and the names Ray Lewington and Dean Kiely are held in very high esteem. You don’t achieve all Roy has in the game as a coach for over 43 years if you are not in the top bracket.

The unfortunate injury situation around Dominic Solanke is another blow, but given the loan fee and wages needing to be paid for a player who may have only been able to affect two-and-a-half months of the season, it’s understandable the club didn’t proceed.

A striker and two forward players to fill the slots created by the departures of two fans’ favourites –  Jonny Williams and Jason Puncheon – will do very nicely.  Jordon Mutch has also come off the wage bill, so let’s hope there is scope for the squad improvement.

If the recruitment team can get this right, the squad will look as good as any outside the elite.

I would caveat that by saying that Premier League quality is very hard to acquire. In recent years Palace have picked up the likes of  Patrick van Aanholt and Mamadou Sakho following reported fallouts at their clubs, with Benteke, Schlupp, Cheickhou Kouyate and James Tomkins no longer in their respective managers’ plans.

The club may have to look at Championship players who may bridge the gap or somebody pulling up trees abroad.

The club has invested heavily in its recruitment team in recent years and it’s time for Dougie Freedman and his colleagues to prove their worth and find the perfect additions in the January sales that would give Roy the reward his tactical nous and approach play warrant.

Roy has Palace playing the best football they have ever done in my 43 years following the club’s fortunes.

One hundred and six attempts at the opposition’s goal in the past five home games tells its own story. Now, if a few more of those could be finished off…

Should January see the reinforcements arrive in the final third that have been needed before a ball was kicked in August, the Eagles fans may enjoy the second half of the season as the Palace rollercoaster picks up speed.

However, a January like 2018 in the transfer market will mean the aforementioned rollercoaster is likely to be very “stop-start” and will leave the Selhurst faithful talking about a season of what might have been.

It will be an interesting month -fingers crossed for the former!

Adam Sells is the managing director of Sells Goalkeeper Products. He has followed the fortunes of Crystal Palace since 1976, working within the club’s academy for more than 15 years until 2013. He is a licensed intermediary, representing a number of goalkeepers including Julian Speroni. Here he picks over the big talking points to come out of the past fortnight.