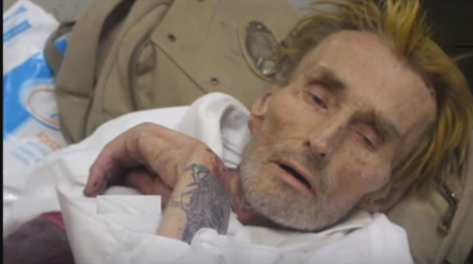 A man is recovering in hospital after being discovered by charity workers at the side of a road in Nepal.

Philip Bradley, 64, from Bromley, was found alone and in a “critical condition” near Kathmandu.

Local charity workers took him to a nearby hospital where he was pictured on a hospital bed looking extremely thin and unwell.

He is reported to have lost his wife to cancer two years ago and subsequently entered into a relationship with a woman from Nepal, and followed her back to her homeland.

Foreign Office officials have visited him in hospital after he was pictured in a Nepalese hospital looking very frail and ill.

An image of Mr Bradley posted on Facebook last week showed him lying on a hospital bed attached to a drip with a knee injury.

Another post by police in Bromley shows him with his eyes barely open and a distinctive tattoo on one arm.

An appeal to help find him was posted on Facebook last week with a picture of Mr Bradley’s passport. It said: “A British citizen named Phillip Bradley from Bromley has been found in Nepal in a very critical condition.

“He is currently admitted to Bir Hospital in Kathmandu due to several infections and has no relatives to look after him. He is repeatedly requesting to send him back to his homeland.” 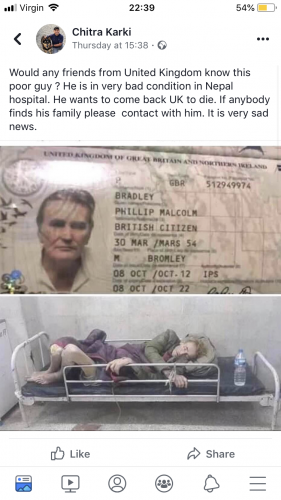 A Foreign Office spokesman said: “Our consular staff are providing ongoing assistance to a British man who has been hospitalised in Kathmandu.

“They have visited the hospital, and are in regular contact with the Nepalese medical professionals who are caring for him.”

Bromley Police posted on Twitter on Friday: “The Foreign Office told us that Phillip Bradley now has contact with a family member. They are not looking for any further relatives or friends to make contact to assist. Thank you for all your help!”