It was an Amazon Prime opportunity for Mamadou Sakho to impress. But instead it was left to Jordan Ayew, Wilfried Zaha and Cheikhou Kouyate to be the star turns for Crystal Palace on Tuesday night.

Roy Hodgson had never lost four home Premier League matches on the bounce. But there seemed to be a very good chance of that happening when the French centre-back – starting due to injuries to Gary Cahill and Scott Dann – was high and late on Adam Smith. 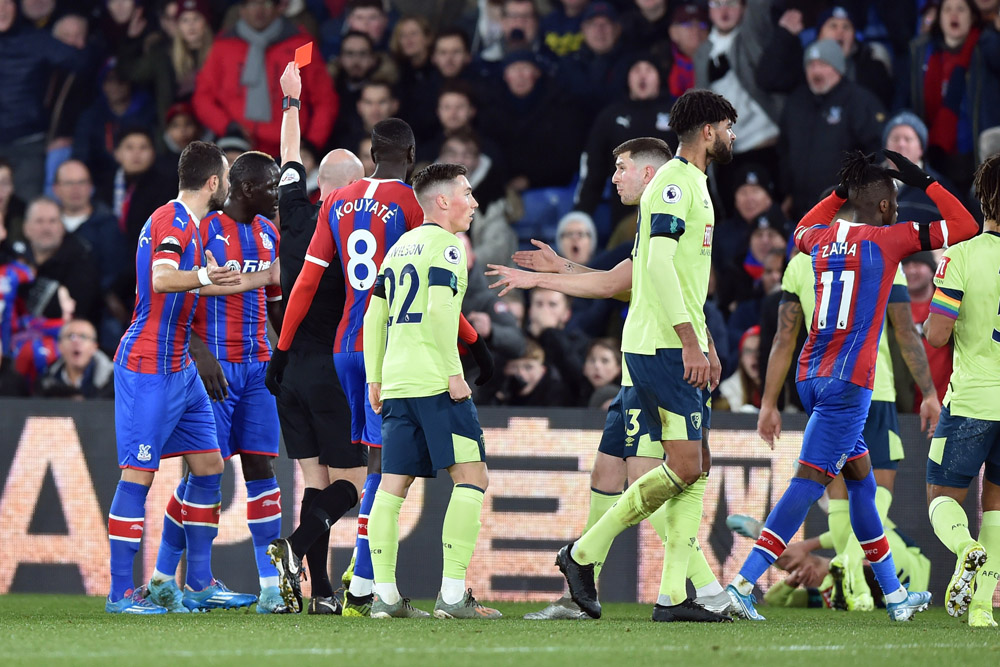 Referee Anthony Taylor had no doubts that Sakho deserved a red card and the Eagles were down to 10 men with just 20 minutes on the clock.

Ten minutes later and Patrick van Aanholt was forced off with a hamstring injury – anything but ideal for the hosts.

But the Eagles went on from that testing position to make it back-to-back victories. 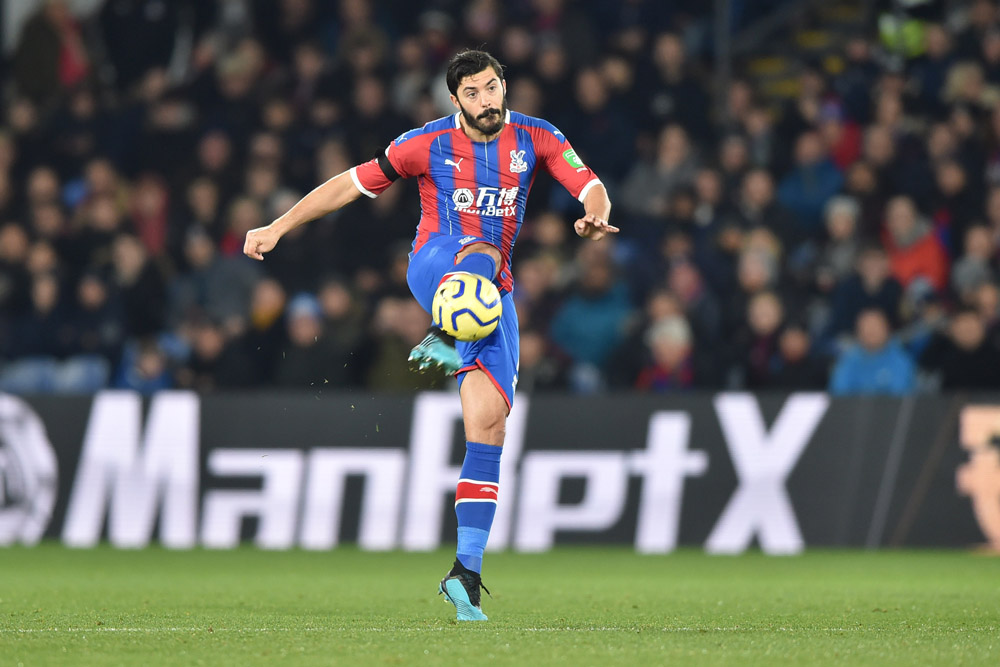 A Hodgson team is always disciplined, organised and has a good shape. Bournemouth were clueless about how to make their numerical advantage count.

Palace’s plan was to counterpunch through the excellent Zaha. Ayew had a similar positive mindset with one exhilarating dribble which took him into the Cherries penalty area despite a swarm of lime-shirted players around him. 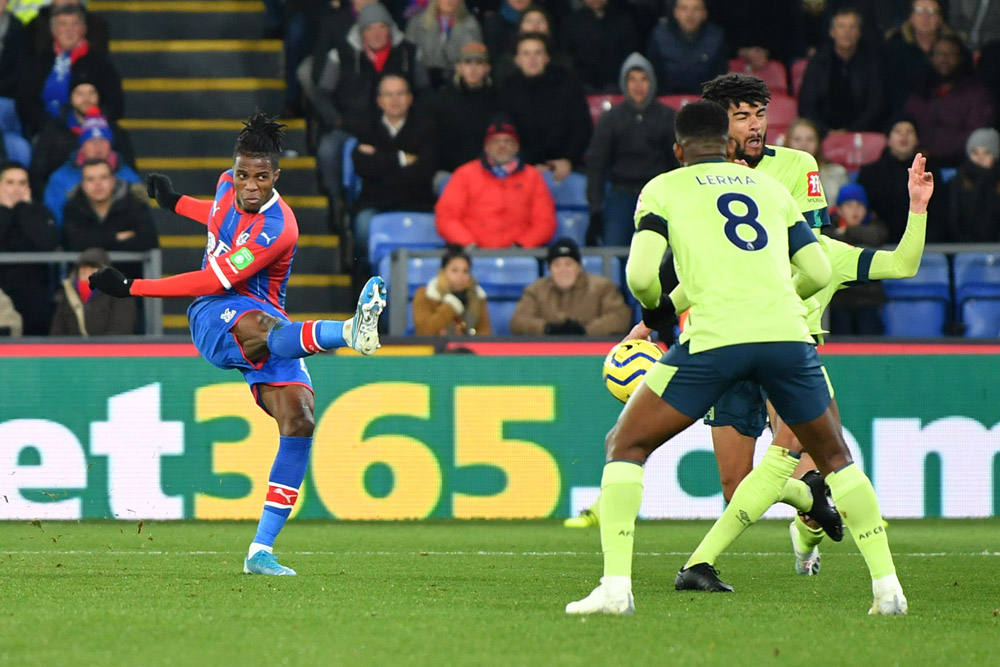 When Jeffrey Schlupp took advantage of the lack of a challenge to fire the Eagles ahead, it was nothing less than they deserved.

It was the first time he had ever scored in consecutive Premier League matches.

Former AFC Wimbledon loanee Aaron Ramsdale had to tip over from James McArthur as the Palace midfielder looked to add extra security to the scoreline. 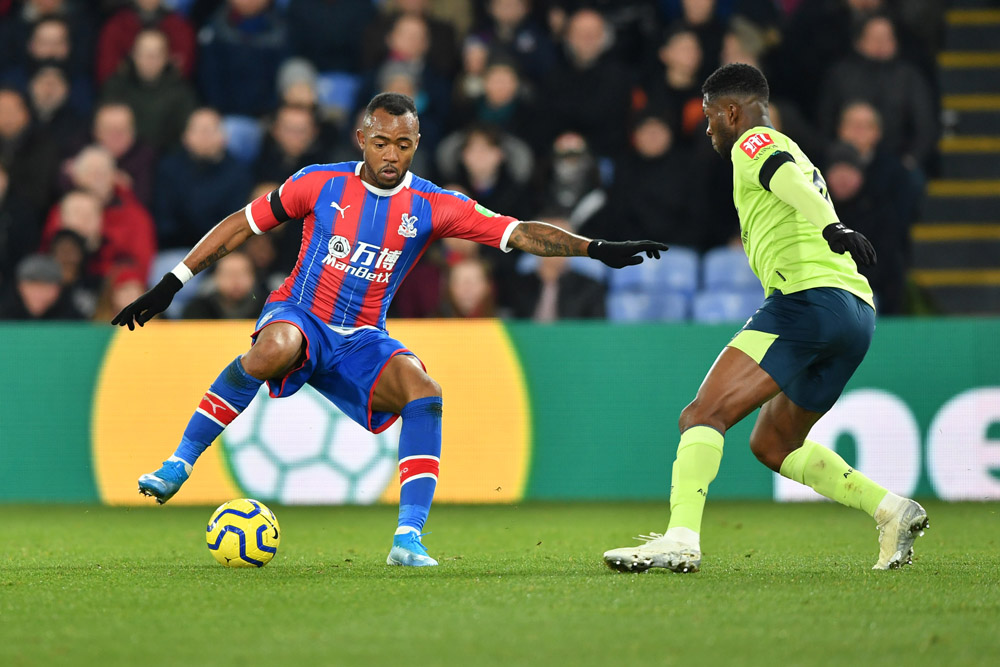 “Can you stream us every week?” would have been a good chant from the home fans – with the fixture being the first to be broadcast online as Amazon dipped their expensively-manicured toe into the world of Premier League football.

The first 45 minutes were no classic. 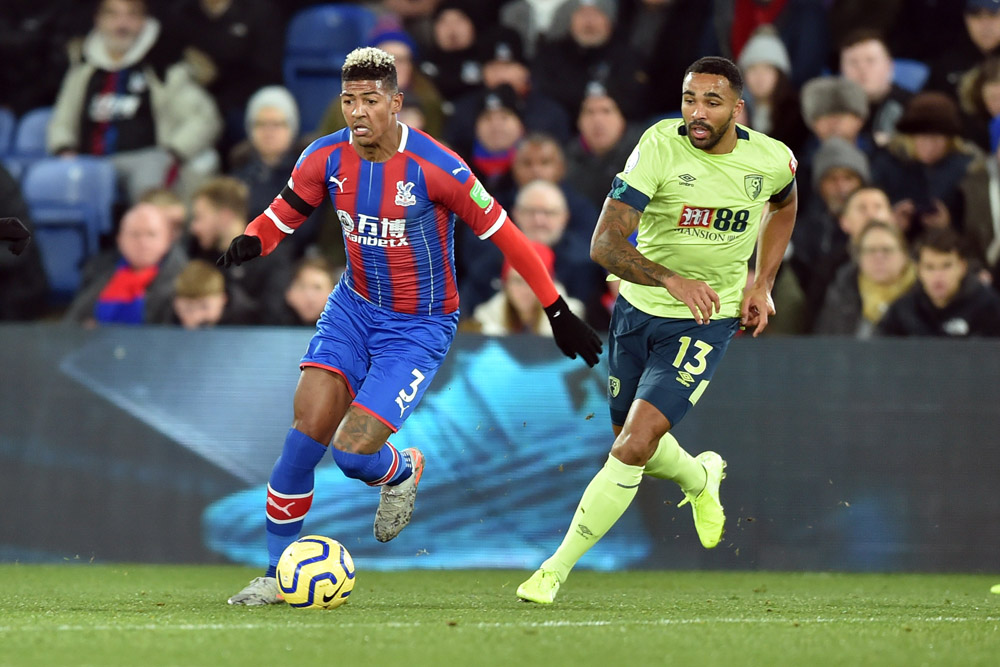 Palace were forced into changes as Cheikhou Kouyate dropped into the middle of the defence after Sakho’s dismissal. I can’t believe the former West Ham midfielder has played that role loads before but he certainly made it look like his regular position.

The Eagles switched to a 4-4-1 with James McCarthy adding more defensive ballast when he replaced Andros Townsend for the second period.

When you have Zaha in your ranks it means there is always an out ball and he has the pace, confidence and trickery on the ball to get Palace up the field. 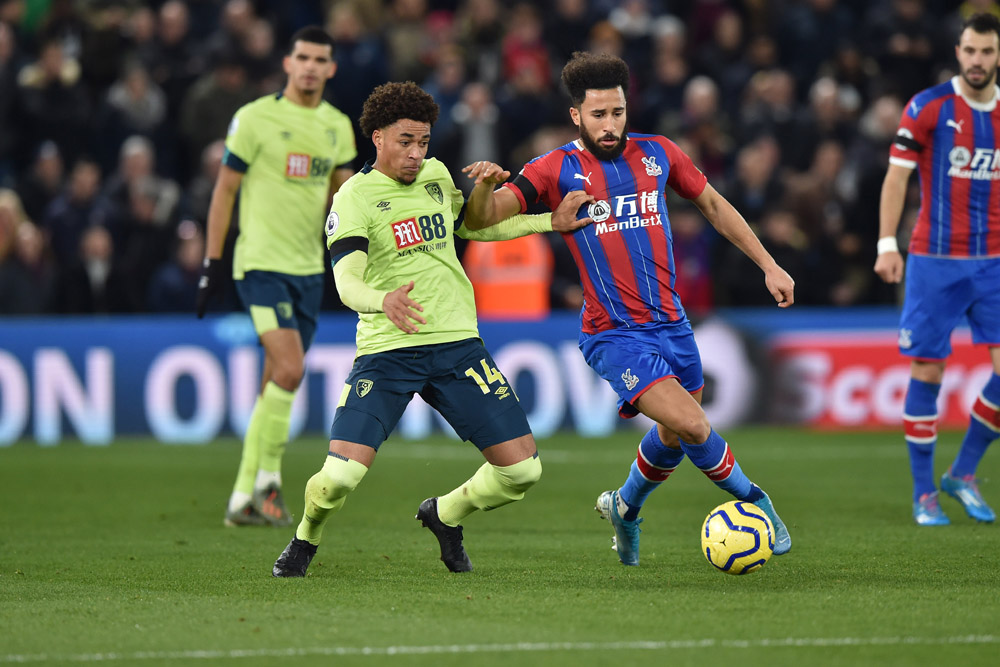 The Ivory Coast international plays the role with such maturity as well. Both Dominic Solanke and Jefferson Lerma picked up yellow cards as they tried to dispossess him in the second half.

While we’re handing out credit, Martin Kelly made a couple of vital interventions. Callum Wilson would surely have tapped in at the back post if the Palace defender had not got a nick to take it out for a corner. And he also produced a late block after Vicente Guaita could only push out a Lerma effort which deflected off Kouyate. 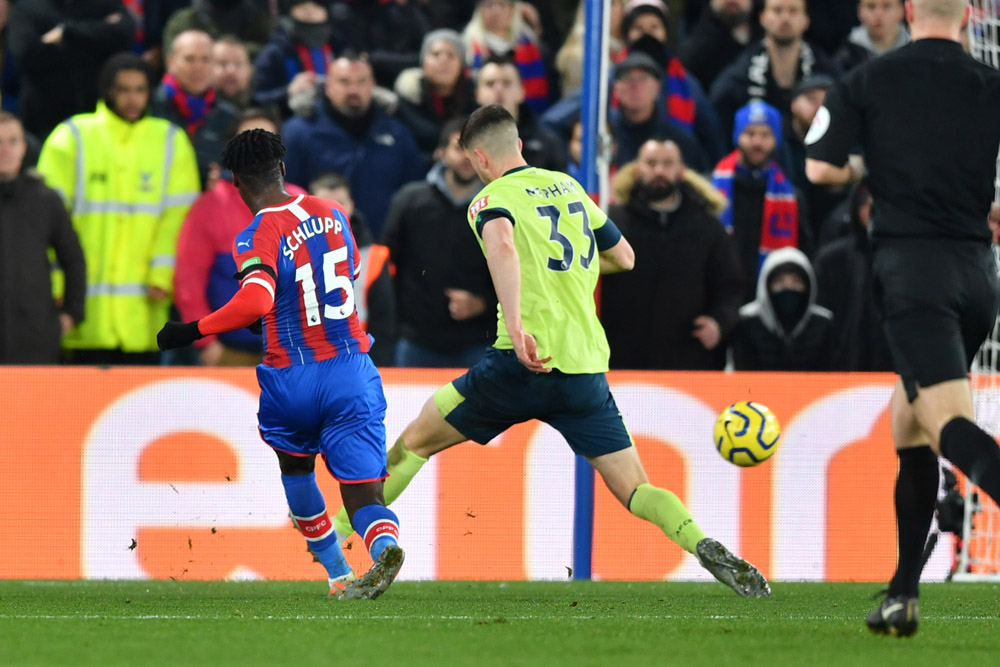 Hodgson sported a wide smile at the final whistle – and with good reason. I’m not always sure the work of the experienced boss is appreciated by some of the fanbase – it can be solid rather than spectacular – but he has Palace on 21 points, more than halfway to what is deemed as the haul needed to guarantee safety with just 15 matches played.

Unfortunately we can only speculate about what the former England chief would have achieved if he had been given the same financial backing as predecessors Sam Allardyce and Alan Pardew. 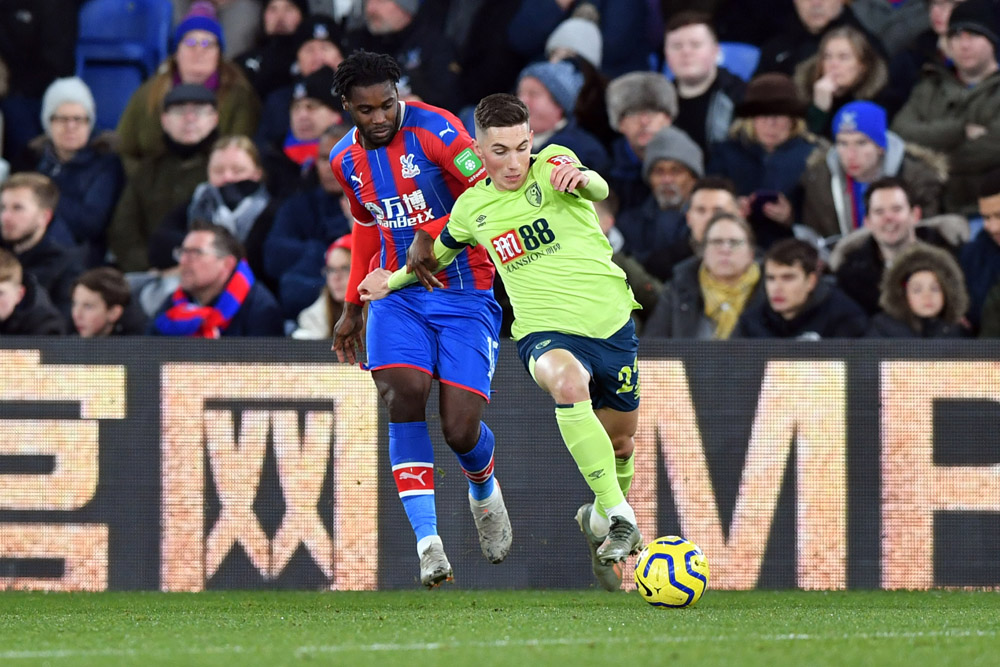 Palace have one of the best defensive records in the division and that’s despite the fact they sold defensive crown jewel Aaron Wan-Bissaka in the summer. The feeling seemed to be that a full-back – no matter how good – is not a game changer in the same way that Zaha’s brilliance can turn a contest on its head.

Ayew is doing a sterling job up front but where would the Eagles be with at least one top-class striker in their midst? Signing one in January is going to be a problem – it’s not usually a window where teams part with the kind of talent that Hodgson would want – but having extra options in that area of the pitch would obviously aid them.

Palace have scored a frugal 14 goals in 15 games – six of those at Selhurst Park. Only bottom club Watford, next up at Vicarage Road tomorrow, have netted fewer.