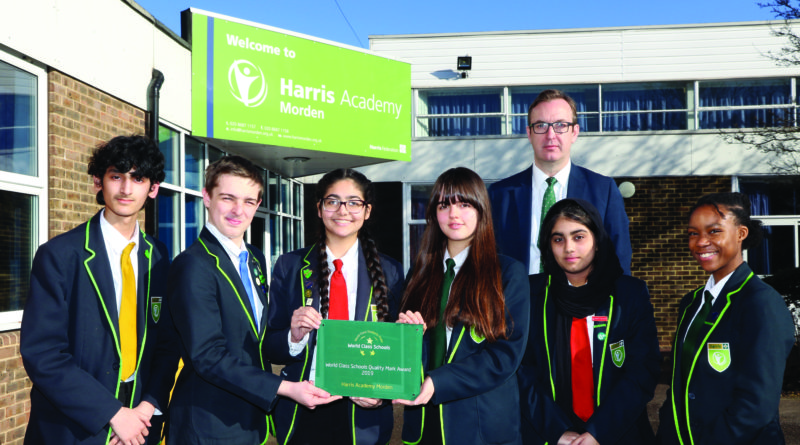 A school has been dubbed “world class” within a decade of being labelled inadequate by inspectors.

Harris Academy Morden in Lilleshall Road now has the World Class Schools Quality Mark (WCSQM) which is given to state schools in the UK.

It was formerly Bishopsford Arts College which was in special measures.

The Harris Federation took it over in 2012, it was rated Good by Ofsted in 2014 and in 2018 given the highest rating of Outstanding.

It has come a long way and in 2019 the academy, which has the motto ‘courage, challenge and success’, had the highest Progress 8 score of any school in Merton.

One of the features of its success is Koren, an eco-focused food and art club which is run alongside the traditional curriculum.

The school also offers training to become a Wimbledon tennis ball-boy or girl and a school newspaper club.

Year 11 pupil Matthew O’Boyle, said it is things like this that make the school stand out from others.

The 16-year-old said: “Before it was a really bad school, it has gone from being one of the worst schools in the borough to now world class.

“The process of [entering the World Class award] made me realise how much the teachers have to do.”

Unlike Ofsted where staff are responsible for representing the school in the best way possible, the road to applying for ‘World Class’ status was down to six pupils aged between 14 and 16.

First off they had to produce a self-audit of the skills and competencies of the school.

And 14-year-old Miracle Burnett who worked on explaining the reasons why the school stands out, says it made her appreciate the work of her teachers.

She said: “The things we have access to is way more out there than other schools. We have a lot of after school clubs, that is mainly what I was looking into for the review.

“Activities include sports clubs and music classes – any instrument we want to play they will make it available.

“Doing the audit helped me personally learn about how great the school actually is. Sometimes we take it for granted.”

She also said that the school’s Twilight Sessions are a help to many pupils – Teachers are on hand to at the extra revision sessions that run after school.

Matthew added: “I was in one just before Christmas doing coursework and we were there until 7pm.”

Fellow 16-year-old Rania Kureshy, said she also attends the sessions which are helpful as there are teachers on hand to help and not the distractions of home.

She added that being part of the Harris Federation gives the school access to the ‘Harris Experience’ – a three-year programme she has benefited from.

It is a cultural and academic enhancement programme and prepares participants for the country’s top universities.

Rania said: “It has let us go to universities and lectures and a two-day summer school at King’s as well as doing further reading for university.”

In the final stage of the process, the group from Harris Academy was teamed up with pupils from other schools to design a classroom for the future.

This involved planning work and communicating with their team members by email as well as an assessment day at a school in Reading.

Farhaan Naser, 15, who was in charge of designing the classroom said: “We were given a budget of £100,000 and the brief was for it to be sustainable and a good working environment.

While Rania had to teach herself how to produce a video of the process, something she had never done before.

Being part of a team with two other schools, one secondary and one primary meant that the group had to work together, even though they had not met.

Leah Thripp, 15, said that this was one of the things that she learnt from the experience.

She said: “We learnt how to communicate with people. Communicating by email is a bit difficult when you can’t see people face to face.”

And while it was down to the group of youngsters to do the work, teachers were on hand to provide them with the information they needed.

Aisha Aslam, 15, said: “The teachers were really supportive to us and it helped us build a nice relationship with the school.”

Headteacher Julian Sparks said he is “amazed” at the hard work of the six pupils.

He said: “The key thing is that it is student-led, it is about the students of the school and whether they meet a set of quite challenging criteria.

“We knew it was going to be a challenging piece of work to get it done to the quality it needed to be.

“They weren’t able to have any staff support, it was them who brought it all together and presented it.

“I am amazed with how they did, the couple of weeks they were doing it we put the school at their disposal, they worked really hard long hours.”

In December, Harris Academy Morden received the status at the annual WCSM Awards Ceremony, hosted by Cambridge University where the school was presented with a plaque.