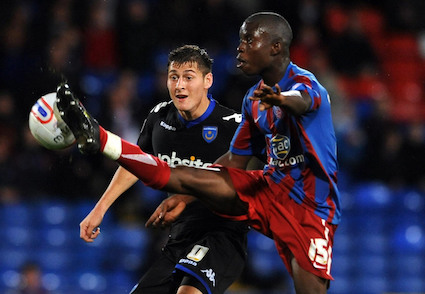 Kieron Cadogan’s Crystal Palace debut in April 2009 came during a time when the club’s academy was at its most productive.

Nathaniel Clyne, James Comley and Kieran Djilali made their senior bows during the same season under Neil Warnock while teenagers Sean Scannell and Victor Moses were already key members of the first team. Lee Hills’ breakthrough had preceded the year earlier and Wilfried Zaha would make his maiden appearance the campaign after.

Perhaps financial trouble meant Palace were pressed harder into promoting their youngsters with funds for transfers at an extreme minimum. Regardless, there remained a sense that the academy was producing genuinely talented footballers.

For Cadogan, however, there was one player who stood out among the rest.

“Victor [Moses] was a bit of a joke,” Cadogan – who netted against Coventry on his professional debut – begins. “I remember one time when I was still in the youth team he got injured playing for the first team. He was trying to rebuild his fitness so he came to play a youth team game against Charlton.

“The things the guy was doing were an absolute joke. It showed the confidence level of going away to the first team and then stepping back down to the youth team. He was flicking the ball over people’s heads, rolling it through their legs. They took him off after 45 minutes because it was way too easy for him.”

Moses would reluctantly move to Wigan Athletic in January 2010 to raise funds. Zaha was next on the academy’s conveyer belt, debuting in May 2010.

Cadogan and Zaha would form an exciting bond the following season. While results under George Burley were to the Eagles’ detriment, it was worth turning up to Selhurst just to witness the streetwise style of the South London-raised duo.

It naturally raised debate about which player was better. The Ivory Coast international is now widely perceived as Palace’s greatest-ever talent, but back in 2010 there were plenty who believed Cadogan was superior. For the 28-year-old though, it was merely two youngsters embracing the big stage.

“I wouldn’t say we were in competition,” Cadogan insists. “Maybe it was healthy competition. We were not envious or jealous of each other because we were quite close, even now we still talk. I think a lot of people just used to compare us because we were both tricky players and we both liked to express ourselves.

“Wilf is a more complete player now but he wasn’t back then. He always had the raw ingredients but a lot of players do at that age, so it’s hard to tell [how good they will become].

“I wouldn’t say I’m surprised by Wilf, I knew he had it in the locker but it’s good to see him doing so well. We had other players like John Bostock who was a ridiculous player, mature beyond his years. For whatever reason it didn’t go the way he wanted it to go.”

Zaha would continue his development into the star of the current Palace team, but Cadogan began to find chances limited with Burley sacked and new manager Dougie Freedman preferring the likes of Darren Ambrose, Scannell and fellow youth product Jonny Williams.

He began to embark on a relatively obscure career path. Having left Palace in the summer of 2012, spells at Barnet and Aldershot followed before the opportunity to join Swedish club GAIS arose in 2014.

That was not the case when Cadogan moved to Gothenburg. However, like many others who have since made similar moves, he believes his three years in Sweden’s second-tier made him a better player.

“I had never considered going abroad. The opportunity came up and I didn’t know how I would react.

“The first option I had was a three-month deal up to the end of their season so I thought ‘let’s go and see how it is, it’s only three months and this is the best opportunity for me right now’. It paid off and it was very good.

“It was more tactical and technical [than in England]. The tempo is a little bit slower but it’s more considered. It improves your football knowledge and you can’t have that with just one way of thinking. Even if you don’t like it out there, it really improves your whole football brain.”

Now back in England with National League Sutton United, Cadogan is still aiming high: “When I came back to England, the level seemed improved all around in the lower leagues. I started off really well and scored a few goals.

“I’d love to get back into the Football League. Whether that’s with Sutton or someone else, who knows?”