The burrito bug has definitely hit London but perhaps not as hard as it’s hit me.

In the last five years, a number of burrito restaurants have sprung up in the capital, bringing modern Mexican food, and perhaps the high street’s healthiest fast food imaginable, to the masses.

But one thing interests me, whenever I frequent them, there is never a queue.

I feel sure that popularity isn’t an issue so is it just that this is the super speedy fast food, taking you from order to consumption in about two minutes?

Whatever the reason, it’s so nice to waltz in, order and eat so quickly, which was exactly what happened last week when I went along to Benito’s Hat in Bromley. 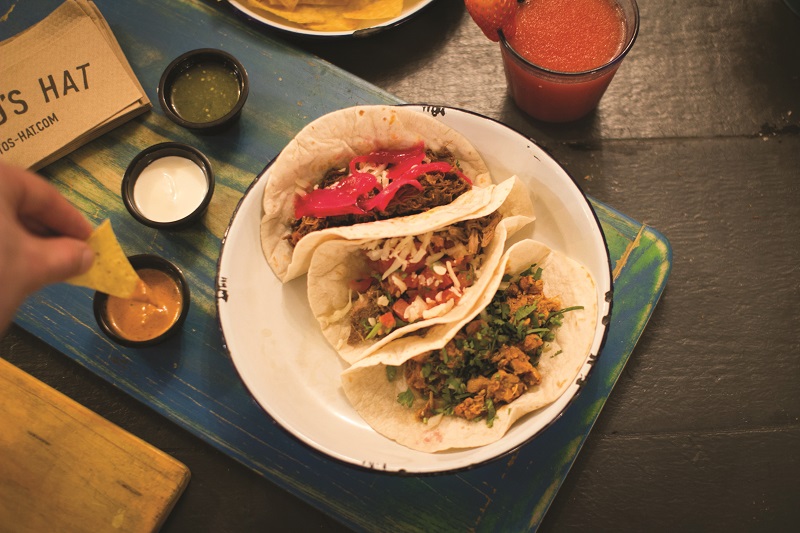 I love the simple approach that they champion here: tacos, burritos, naked (the aforementioned without the outer casing for fewer calories, and salads.

I like the thought of tacos but the reality of a fairly messy lunch puts me off so I stay loyal to the trusty burrito.

The choice if filling is impressive. I would usually opt for the chargrilled meat variety, normally chicken or pork but Benito’s has added a few quirkily named specials since my last visit.

An excellent choice combining sweetly charred meat, with the freshness of the rice and vegetable accompaniments.

At just £6.85, the burrito weighs in heavily as the best value for money lunch out there.

This is a lunch so substantial that you’ll be unlikely to manage much in the way of dinner later on in the day.

My companion took on the mammoth El Presidente Burrito, a barrel of burrito, combining pork, chicken and beef, with all of the above trimmings.

Surprisingly, this is still only £8. 90, and while a meaty bridge too far for me, I’m assured it was packed with flavour.

There is a starter section but venturing there alone is ill advised, given the size of the burrito. However, a dish to share could work.

In fact, tortilla chips with salsa or guacamole would be a good choice, in a bid to keeping ordering light.

For those not up to the rigours of a classic burrito, you can order a baby version for £1 less, perhaps a better option for the grab-and-go customer.

Warning: Eating a burrito requires you be seated and use of both hands.

I can’t believe many people order dessert after such a substantial lunch but churros – doughnuts sprinkled with cinnamon and dipped in a hot chocolate sauce – are generally an excellent direction in which to wander.

Our lunchtime visit meant alcoholic drinks were off the menu and I wasn’t persuaded by the Paloma cocktail.

Hugely tempted but not quite persuaded.

Perhaps the time to imbibe is Monday, when it’s Happy Hour all day or between 5pm and 7pm on week days.