Acting runs in the bloodline of AFC Wimbledon’s Nesta Guinness-Walker, but the left-back has never harboured any doubts about pursuing a career in professional football over following family tradition.

The 19-year-old is the great-grandson of the Star Wars actor Sir Alec Guinness, who played Obi Wan-Kenobi in the original trilogy series.

Guinness’s son Matthew has also featured in films and in theatre. Sally Guinness – Nesta’s mother – has appeared in three dramas since 2015.

“He [Alec Guinness] died when I was almost one so I don’t remember much, but a lot of people know a lot about him,” said Guinness-Walker.

“Acting does filter down through the family. I’ve got quite a performing family, quite a few actors. I always say that performing runs in the family – but my type of performance is on the pitch.”

And it is on football pitches where the Dons’ summer signing is beginning to make a name for himself. The former Metropolitan Police man has started each of Wimbledon’s opening six matches in all competitions and scored his first professional goal in the 2-1 defeat against Ipswich Town last week.

Had circumstances followed a different path and had different decisions been made, he could have been starting the season in the U23 side of a Premier League club. It would have meant a return to the academy system from which he left to play Sunday League football at the age of 11.

Guinness-Walker, who has grown up in Twickenham but could pursue an international career with Barbados, spent a combined three years in the set-ups of both Chelsea and Tottenham Hotspur.

The Blues had the chance to re-sign the teenager in the summer following a trial at their Cobham training ground, but the lure of continuing playing men’s football at Wimbledon – having had a successful senior campaign at Met Police – was too inviting to turn down.

“Something that has given me an edge is that I have played men’s football,” said Guinness-Walker, who passed A-levels in maths, history and physical education.

“A lot of young players now are going to different countries to get that first-team experience because it’s not as accessible here. The men’s football has definitely helped me at Wimbledon to step in and kick on. 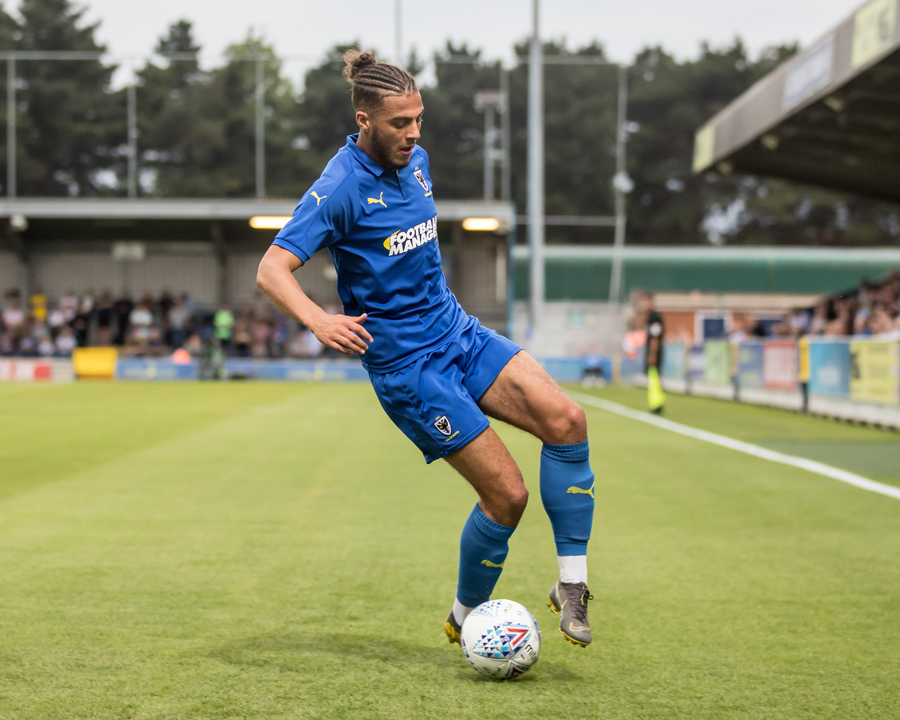 “I did have a slight thought about going abroad last year because I did start thinking that it [professional football] wasn’t going to come around. I spoke to a few close family members and friends, they said: ‘Stick at it and keep working and you will get what you deserve’.

“Luckily for me, I have managed to stay in England because something that I have always wanted to do is play in the Football League.

“At the end of last season I had a trial at Chelsea as well as at Wimbledon. We had a few talks with Chelsea but I had my mind set on Wimbledon – they were offering me the chance to play first-team football. That is all you want as a young lad.

“I don’t think it was a ‘no’ to Chelsea, but more of a sense of ‘yes’ to Wimbledon. The quality of players in the U18 and U23 Premier League clubs is at the best level in the world. It was hard to turn that down because I would have learned a lot from the quality of players around me and the coaching staff and it would be a good league to be in.

“Wally Downes called me into his office and I had a good one-to-one meeting with him. They were offering me the opportunity to come in and play first team football and I would not have had that opportunity playing at Chelsea in the U23s.”

Guinness-Walker signed for Chelsea aged seven and played in the same group as Blues right-back Reece James – with whom he remains friends. He was released two years later before being let go by Spurs aged 11 after a year with the north London club.

It was not until the age of 17 that he would leave behind Sunday League football when Met Police signed him to their U18 team.

However, the possible fear of a third release was not considered when deciding which club to join in the summer.

“You’re always going to have ups and downs in football and I didn’t have any sort of resentment from my previous releases,” he insists. “It was one of the toughest decisions of my life, deciding which club to go to, because it could potentially shape the rest of my life.

“The main factor for me was that opportunity to play first-team football and play in the league at AFC Wimbledon that they had offered me.”

The Dons have suffered a difficult start to the 2019-20 League One campaign. They were expected to kick on after last season’s miraculous survival, which went down to the final game against Bradford and a 0-0 draw saw them stay up on goal difference. They remain without a win and their only point came in a draw against Accrington Stanley.

But Guinness-Walker believes the form of the South London club will soon improve. He has also noticed big differences between non-league and professional football, but says sacrifices were already in place should he be offered a chance in full-time football.

“While I was at Met Police I tried to keep my diet and training routines as professional as I could, so that I could make the transition whenever I did get that opportunity to step into professional football. The training and resting are much more intense but I have tried to keep that same type of lifestyle as I had before.

“AFC Wimbledon is a great club and I was over the moon to sign. Any player, given the opportunity, should come and play for this club. It has got a great history, it is a great club and Wally always says to us that every player wants to play at the highest level they possibly can. You have to challenge yourself.

“Everyone works for each other. There’s a real family togetherness which is still there throughout the season, even though we have had a few disappointing results we are still together as a family. That has come from Wally installing that into us.

“For me, it’s about getting more game time and hopefully some more goals. I want to play at the highest level possible and hopefully that will be with Wimbledon.”