Charlton Athletic suffered a first defeat of pre-season – with Brendan Sarpong-Wiredu cutting the margin of defeat just before the end of Tuesday night’s friendly.

Goals each side of half-time – an Ayo Obileye penalty and a sweet finish from an unnamed trialist – were nothing less than Ebbsfleet United deserved.

And Charlton looked sluggish, both defensively and with some of their attacking play.

Ben Amos, signed on a free transfer on Monday, played in goal and stayed on until the hour mark – when boss Lee Bowyer changed his entire side.

There was also a return for ex-Addicks winger Callum Harriott, released by Reading in the summer.

Charlton did have early chances at the Kuflink Stadium with Jake Forster-Caskey driving an effort wide from the edge of the box.

He supplied a chance for Lyle Taylor on 10 minutes. Last season’s top-scorer managed to go around United keeper Nathan Ashmore but his shot hit the back of Jack King’s head.

Albie Morgan collected a pass from Forster-Caskey and cut inside on his left foot, his low strike coming off the base of the right post. 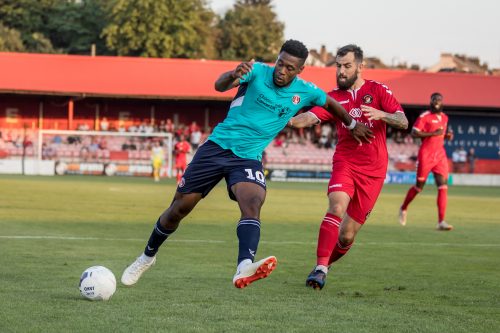 Charlton were not tight at the back – although it is far too early to have alarm bells ringing in a low-key workout. It needed Anfernee Dijksteel to make a vital interception to deny Sean Shields but then the Dutchman lost the ball cheaply soon just outside the penalty area, Darren Pratley doing a fine job of mopping up the danger.

Ebbsfleet went 1-0 up on 43 minutes. Chuks Aneke’s flick was deflected into the path of an Ebbsfleet trialist and Ben Purrington brought him down. There were doubts about the veracity of the appeal and also a strong claim for offside. Obileye sent Amos the wrong way from the penalty spot.

The National League side continued to cause problems for Charlton, who operated with a three-man defence all evening.

Substitute Gozie Ugwu saw a chance float just wide after he got to the ball before Jason Pearce after the restart.

And Charlton fell further behind when a whipped ball from the right was slid in by the trialist who had won the first-half penalty.

Harriott sent a left-footed hit over the bar with 11 minutes to play. But even noting that as an effort summed up how difficult the Addicks found it to carve out opportunities.

It was entirely in keeping with Charlton’s display that an excellent delivery by Lewis Page did not get the close-range finishing touch it deserved as the friendly neared full time.

But then they did produce an excellently-worked consolation. Junior Quitirna’s flick was latched on to by Abraham Odoh and he found Sarpong-Wiredu in space. Just as at Welling on Saturday, the youngster found the back of the net.