The National League South side look to cause an upset tonight at Champion Hill as they face Carlisle United – the first round tie will be televised by BBC Two.

Lewisham-born striker Yusuff is desperate for a shot back in the professional game. The 25-year-old, who grew up in Brockley but now lives in Dartford, spent two seasons on the books of Dagenham & Redbridge when they were a League Two club.

He has scored for Dulwich in two of the previous three rounds of the FA Cup.

Yusuff netted 51 times in 102 appearances for Folkestone Invicta before making the move to Champion Hill in the summer – one of the lures being a shift closer to a full-time training schedule.

“I’d heard Gavin [Rose, manager] was interested the season before but for one reason or another it didn’t happen,” said Yusuff. “Going almost full-time appealed to me a lot.

“Then there was the history of the club in terms of selling players – especially forwards. I felt like I’d had two good years – scoring 50-plus goals – to propel myself up the ladder.

“We train three mornings a week. I want to play as high as I can and this is the biggest club in our league – who wouldn’t want to play in front of 2,000 people every week? 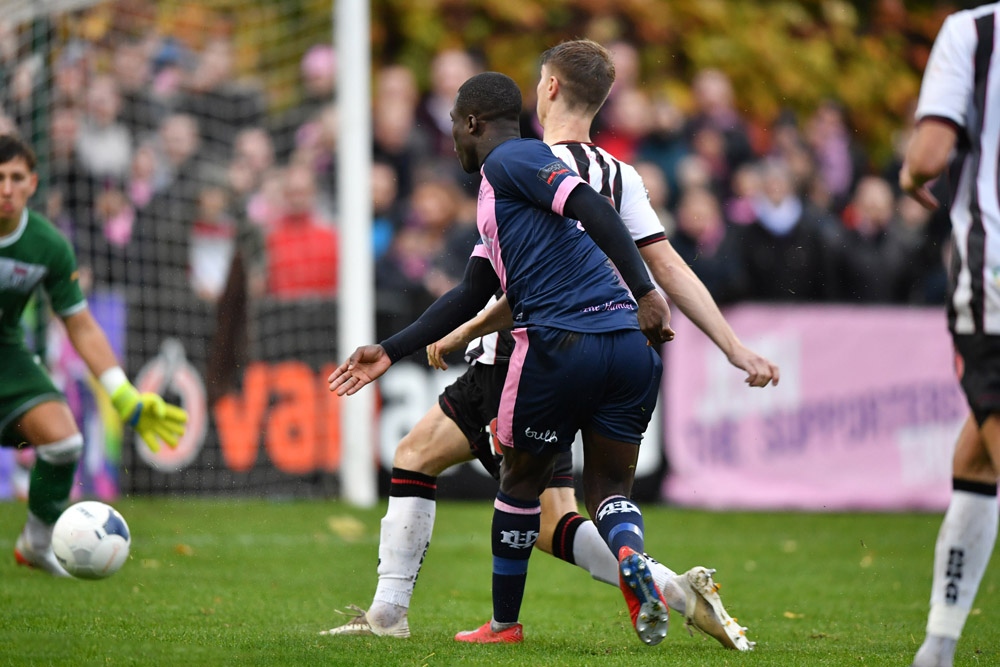 “I didn’t really hear about it [professional clubs being interested] while I was at Folkestone – it felt like what I did there went unnoticed. Maybe that is because of the area they are in. If someone goes to watch Folkestone then that’s an all-day scenario. If they go to Dulwich then they are out for the afternoon and back with the family by 6pm.

“It was a surprise. I scored 30 goals in my first season there and I was 23 years old. I got another 21 last season.”

Tonight is a chance for Dulwich’s players to write another chapter in their FA Cup story. It is the first time in 21 years they have reached this stage.

It is also a chance to forget about their slump in the league, which they have not won in since August 24.

“This is the furthest I’ve ever been in the FA Cup,” said Yusuff. “This is probably one of the biggest games of my career.

“There are boys in this squad who can definitely play above this level but it is about having consistency week in and week out. This is a great chance to showcase what we can do.

“Scouts don’t just come and watch you for one game. I could go and score a hat-trick on Friday night but they would still want to see me again – what I’m like week to week.

“There are almost too many to mention here who could play higher – Ben Chapman, Aaron Barnes, Connor Hunte, Dominic Vose and Jack Connors. I’m sure a lot have that ambition.

“This is a free hit for us.

“We are going to go out there as underdogs, playing a team who are two divisions above, but we are confident in what we are doing.

“That is the magic of the cup – being able to beat a team from higher up. In a one-off match it can depend who wants it more.

“We have the advantage that it is a home game for us and they have got to travel down. On our day we can cause an upset, definitely.

Dulwich’s players will have tunnel vision on the Cumbrians but that doesn’t mean that Rose’s squad can’t dream about getting to the third round, when Premier League and Championship clubs come in.

“I’m an Arsenal fan – so I’d love to play at the Emirates,” said Yusuff, who also scored 24 goals in 38 games for Chatham Town to land his shot at the Daggers in 2014. “But I’d also love to go to Manchester City or Liverpool, further up north, because they are two of the best club teams in the world.

“You’d love to play against those type of players, to see how good they are. You’ve got to think like that. Look at Lincoln or Havant & Waterlooville. Lincoln played Arsenal in the quarter-finals. Dover played Crystal Palace. You never expect to get that far, but then you do.

“It is the memories as a player – saying you have gone and done this and played there.

“When you look back you can have no regrets.

“Hopefully I’ll be selected. If I do play then I will give my all, which I think I do in every game. But this is a different type of test – being on TV and having so many people there.

“It is something myself and the boys should thrive on.

“We want to be playing in front of big crowds and showing how good we are. The whole nation will be watching the  game. It is a tremendous occasion for the club and the players.”

Yusuff is a teaching assistant at Harris Academy Falconwood – but has gone part-time there since penning a deal with Dulwich. He got their goal in Saturday’s 3-1 home loss to Bath City.

Hamlet have not won in their last nine fixtures in the league – drawing four of those.

Progression in the FA Cup has slightly softened the blow of dropping down the table – with £36,000 in prize money for the winners of tonight’s tie. Last season the live TV fee for a first round game was £67,500.

Yusuff is confident their league struggles will soon be a thing of the past.

“It is something we have to address – we can’t pretend it isn’t happening,” he said. “But since I’ve been back starting we have been doing a bit better. We are playing alright but not quite clicking as we have in the cups.

“We know the league is our bread and butter and we can’t paint over the cracks.

“But I don’t think it is something to be concerned about just yet. It is only November, there is still a long way to go. I’m sue we’ll start getting it right in the coming weeks.”