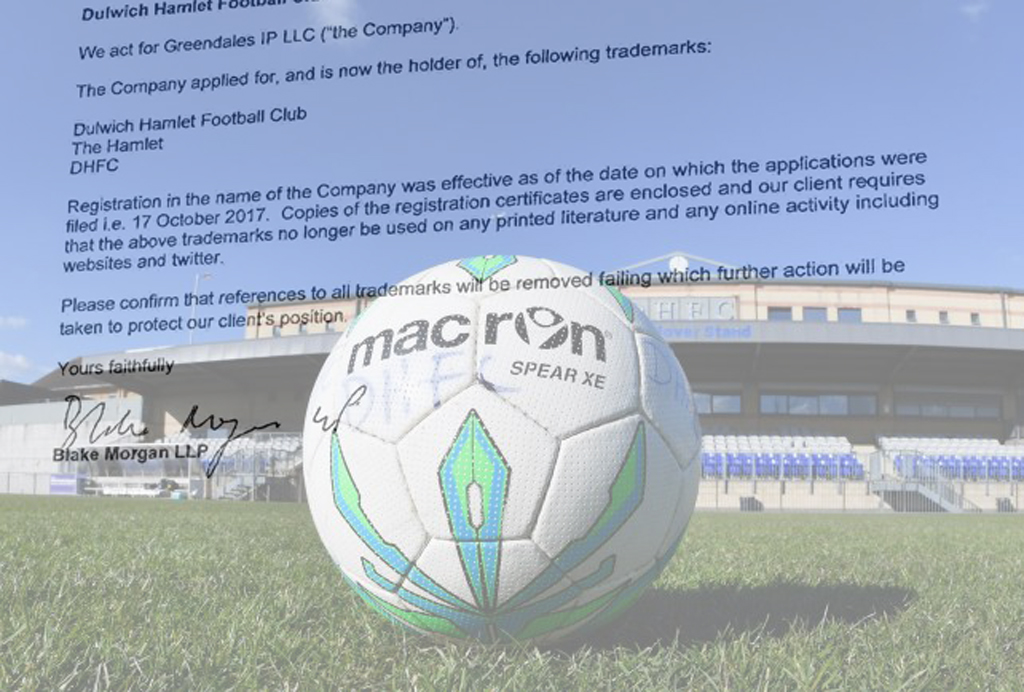 Rapidly expanding non-league football club Dulwich Hamlet’s landlords have done a U-turn on a threat to force the side to stop using its ground, name, nickname and badge.

Developers Meadow Residential (MR) issued a statement today offering to hand back the 125-year-old club’s identity assets, following an angry response from fans across the world.
It has also agreed to scrap a threat to evict them from their Champion Hill ground.

MR had registered the trademarks in October and yesterday sent Hamlet staff a letter, through solicitors Blake Morgan, demanding it stop using them all immediately. Only hours before, it had also served notice to the club that it wanted to evict them immediately.

But MR’s climbdown could now pave the way for a more productive period of talks after the row threatened to turn into a war of words between the fans and the club’s landowners.

The statement from MR said:

“Meadow has made contact with DHST to facilitate the immediate transfer, at no cost, of the trademarks to preserve the name and identity of The Club itself, irrespective of the continued insolvency of DHFC Ltd.

“Over the past few days we have heard and listened to the concerns expressed by the Mayor of London, local MPs and the many fans who care about The Club. We remain willing to sit down with all parties to find a way forward. Our view is that is best achieved by:

“Meadow agreeing to allow the Club to operate from Champion Hill for the remainder of the season.

“Meadow transferring with immediate effect the ownership of the trade marks to DHST, ensuring that the fans properly own the name and can work with us, DHFC Ltd and Southwark Council to make the changes that are needed to secure its future.

“Meadow’s fundamental position has never changed. Meadow owns the Champion Hill site and wishes to develop it to provide much needed housing, including affordable housing, and a new stadium for The Club therefore securing its future at Champion Hill. With the support of Southwark Council, the community and ultimately the involvement of The Mayor of London, Meadow will do so.

“Meadow has no dispute with the playing staff, the many loyal fans and members of the community who care about The Club and who want The Club to survive. Meadow would never have committed such significant sums of money to support the club if it did not genuinely believe in its importance and value to the community.

“Meadow bought the Champion Hill site out of administration on 6th February 2014. At the time of acquisition, DHFC Ltd was insolvent and owed significant sums to Her Majesty’s Revenue and Customs and various utility companies and service providers.

“Meadow paid off these DHFC Ltd liabilities to allow continued operation of The Club. Meadow then granted DHFC Ltd a licence to play their home matches at Champion Hill. During the term of licensed usage, Meadow has received no rent (despite being due under the licence) and have subsidised the day to day operations of DHFC Ltd. The total funding Meadow has provided just so the club can keep playing is in excess of £750,000 paid by Meadow over the last three seasons.

“Meadow’s plan for the Champion Hill site is to replace the current ground with a new stadium, secure the long‐term financial future of The Club and provide much needed housing. Over a number of years, we sought to engage constructively with Southwark Council to secure planning permission in order to implement our plan and therefore ensure the long‐term survival of The Club.”

MR want to move Hamlet to the next door Greendale Playing Fields and build 150 flats on the current pitch. Southwark council say the site should take 30 homes at most.

More details on this later and in Friday’s South London Press.

One thought on “Dulwich Hamlet landlords backtrack on bid to seize club ground, name and badge”