BY MARK RITSON AT PRIESTFIELD STADIUM

After what has been a pretty tough schedule to the new season, AFC Wimbledon will be delighted to finally get a full week to prepare for Saturday’s home game against Scunthorpe United.

The 1-0 win at Gillingham was scrappy at times but it was also a disciplined and organised performance from the Dons, who had to regroup following a 3-0 defeat at Burton Albion previously.

Even with the home side piling on late pressure, Wimbledon had a new-found grit and determination to see the game out. 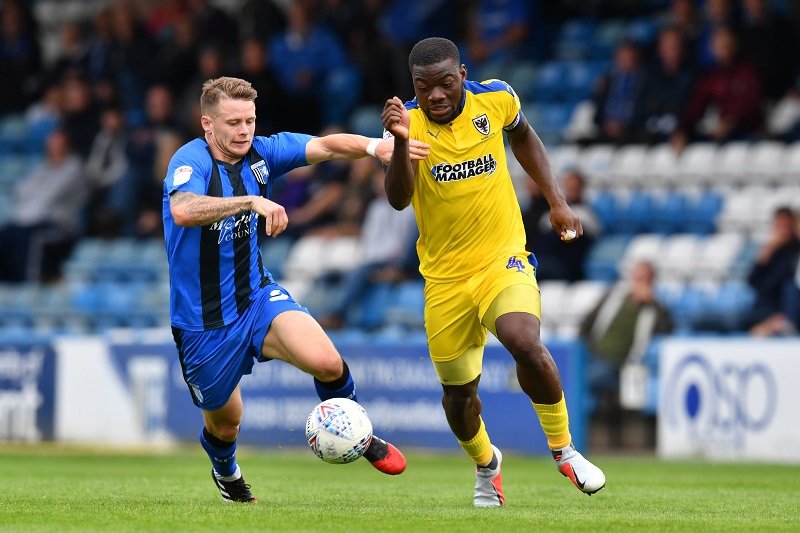 And it wasn’t just the defenders with substitute winger Mitch Pinnock getting back to put in a last-gasp clearance with his head, to deny what looked a certain equaliser.

It was an organised and assured performance.

We often see that with teams following a thumping. Dons boss Ardley gave his orders and his players responded – the clean sheet will give them a huge injection of confidence.

Wimbledon started the day just one place outside the bottom four. Yes, we’re only a few games into the season when clubs can easily move up or down on the back of one result, but to climb into mid-table will give the players a mental boost.

It was a drab affair early on at Priestfield, both teams trying to find a rhythm.

Scott Wagstaff, up against the side he left in the summer, was involved in the Dons’ first attempt in the final third, going down on the right side of the box but it would have been soft if a penalty had been given.

Then, within 90 seconds midway through the half, the Dons had two or three chances as they sprang to life. James Hanson was desperately unlucky to hit the crossbar, before Joe Pigott had a follow-up chance saved and also a volley just wide.

It must also be said, Ben Purrington impressed and got forward extremely well down the left, but perhaps didn’t have the same effect in the second half. He was another plus point, attack-wise.

Pigott was putting himself about, holding up play and you could sense his confidence had perked up after those chances in quick succession.

His partnership with Hanson is still a work in progress, both being big and strong, rather than the big man-little man combination some sides possess, or perhaps having someone quicker alongside a target man from the off.

But Ardley has those options for certain opposition, and we saw that in the second half when Kwesi Appiah injected some pace to give Pigott a helping hand with the running up top.

Pigott’s goal was hugely deserved. It wasn’t an easy finish either. He still had to beat goalkeeper Tomas Holy, going around him which created a fairly tight angle and with a defender looking to make a block on the line. His only chance was to lift the ball into the net – which he did perfectly.

The 24-year-old was clearly enjoying himself and nearly grabbed a second soon after, attempting to lob Holy who had rushed out of his goal.

At the other end, a mention needs to be saved for Tom King. If there was ever an example of highlighting the life of a goalkeeper, it was in the 88th minute.

King didn’t have much to do all game. The Dons’ backline had worked superbly as a unit to limit any threat, but he stepped up to the plate with a fantastic diving save to his right to stop a free-kick and ensure all three points came back to South London.

The Dons need to produce these type of performances more often.

That first win at home in the league has evaded Ardley’s men so far this season.

Scunthorpe have been a side at the top end of League One in recent years but have started slowly and are trying to implement the methods of new manager Stuart McCall. It could be good time to play them.