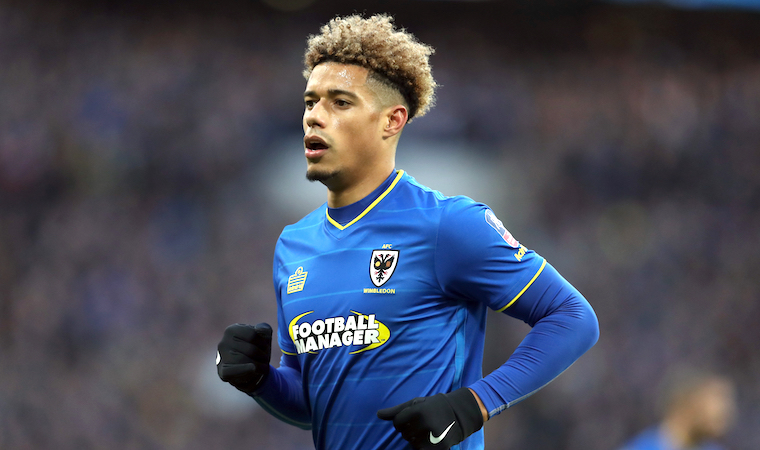 By Laurence Lowne at Home Park

Lyle Taylor’s double took him past the 50-goal mark for Wimbledon – but a missed penalty cost him the chance of a hat-trick at Home Park.

Taylor kept the Dons in contention with goals either side of half-time, but he then failed from the spot as Neal Ardley’s side slid to their fourth defeat in a row.

Plymouth’s George Carey opened the scoring in the 16th minute after charging down a Callum Kennedy clearance and advancing into the box, then dispatching with ease.

Carey only failed to add to his tally thanks to George Long, who made some crucial saves in goal for the Dons.

Taylor, who put in a performance of skill and tenacity, equalised in the 37th minute, lashing home across the keeper after Deji Oshilaja had recycled the ball to Barry Fuller wide on the right.

However, Plymouth went in 3-1 up at half-time, with David Fox blasting home from 20 yards following a controversial corner award.

That setback was compounded in the third minute of added time – when only two had been signalled – as Long parried Carey’s free-kick and the rebound fell nicely for Ryan Taylor to score.

Wimbledon pinned the home side back at the start of the second half and Taylor benefited from a lucky break as a defensive clearance rebounded off him and into the Plymouth net.

Within a minute, Taylor was free again – and fired home what appeared to be another equaliser – but he was adjudged to have taken the ball out of play in the build-up.

The Pilgrims took advantage as a long clearance secured their fourth goal in the 67th minute through Ruben Lameiras, with Oshilaja slow to clear his lines.

It looked as if there was no way back for the Dons, but almost immediately Darius Charles was brought down and the referee awarded a penalty.

Taylor’s spot-kick was well struck, but too close to the keeper and that

The only remaining highlight for Wimbledon was the long-awaited

return of Dean Parrett, who replaced Jimmy Abdou for the last 14 minutes.

But Parrett was unable to influence the outcome – a fourth straight loss for the Dons which, allied to results elsewhere, tipped them back into the bottom four.

They still have a better goal difference and games in hand on those above them, but need to begin a revival on Saturday, when Bristol Rovers come visiting.