Defying all the odds, Welling United’s threadbare squad travelled to Wealdstone and stunned them 3-1 with an outstanding display.

The National League South side had been left stunned by the FA’s late announcement not to overturn Danny Mills’ ludicrous red card. Manager Steve King had no time to bring in a replacement, so had to plan his tactics around playing two short players up front. 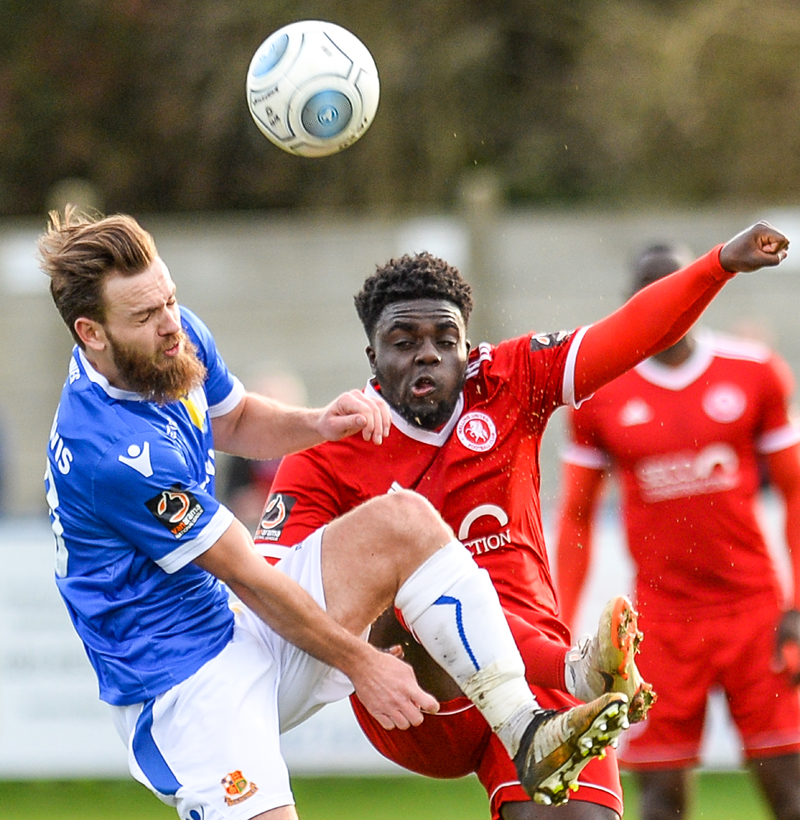 Midfielders David Ijaha and Arnaud Mendy were also suspended, meaning that centre-back Thierry Audel was asked to play alongside Montel Agyemang, who completed a full 90 minutes in the league for the first time in four months.

Craig Braham-Barrett had to play at right-back to cover for the injured Jordan Gibbons and Lanre Oyebanjo with Caden Genovesi starting a second loan spell at the club, from Queen’s Park Rangers, slotting in at left back.

They were further hampered when Julien Anau injured himself in the warm up and had to be replaced in the seventh minute, Zack Newton coming on with Gavin McCallum reverting to his more familiar wide-left position. 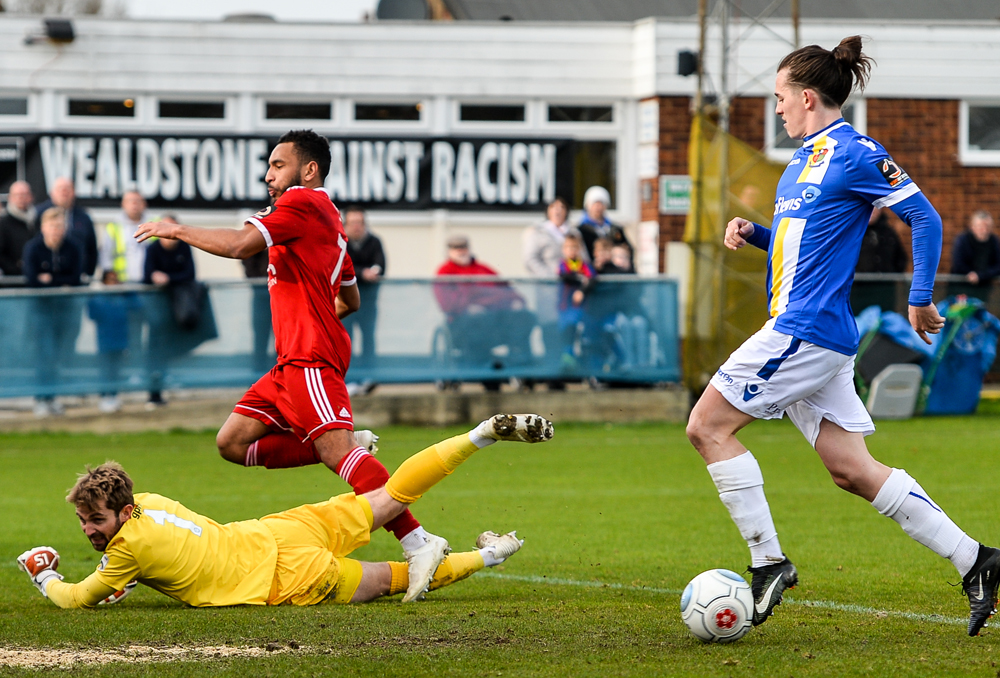 Wealdstone went ahead on 15 minutes when Daniel Green converted a penalty after Josh Hill was deemed to have handled.

Welling’s grit and determination showed in abundance and they went close to levelling when Agyemang’s curler came back off the crossbar.

Wings’ Caden Genovesi made a vital block from a shot by Tarryn Allarakhia, then headed Simon Mensah’s header off the line as he settled back in as if he had never been away. 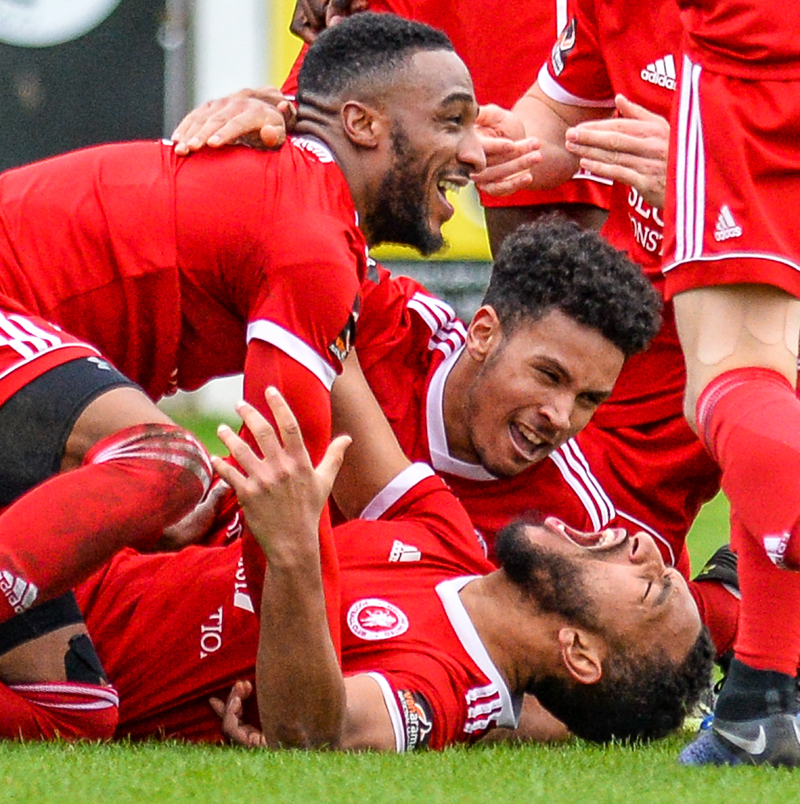 Gavin McCallum tested Jonathan North with a low drive before Welling equalised on the half-hour mark. Newton found Bradley Goldberg and he squared to Brendan Kiernan, whose shot went in via North and Freddie Grant.

Dan Wilks had to make a couple of saves, first from Mensah with his feet then from Stefan Brown as the hosts enjoyed their best spell just before the break. 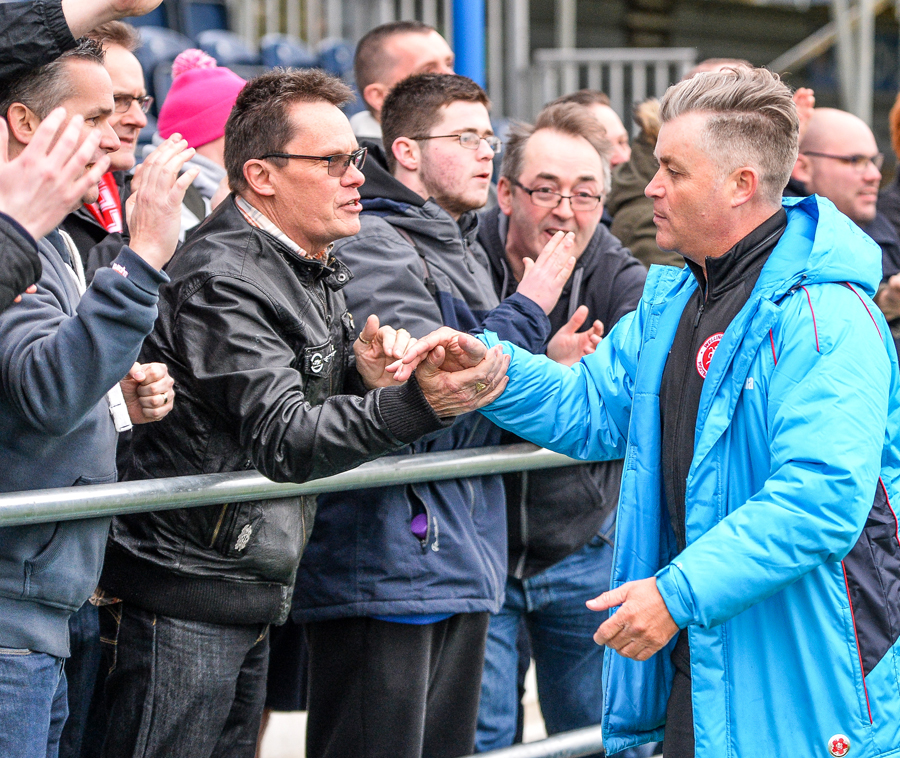 Welling came out strongly in the second half with the wind behind them – going ahead on 509 minutes. Goldberg collected a pass from Newton and measured a powerful shot just inside the far post.

North saved Kiernan’s header before both teams struck the woodwork.

Goldberg brought a good save out of North before Wilks got down well to thwart Stefan Brown.

Victory for Welling was ensured in injury time when Newton held play up well before playing it back to McCallum. His clinical through ball found Kiernan and he clipped it over the onrushing North.