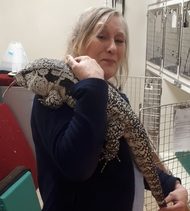 A giant and potentially dangerous lizard has been found roaming in a park by a member of the public.

National pet charity Blue Cross is issuing renewed warnings against buying exotic pets after the Blue tegu, measuring 46 inches from nose to tail, was found abandoned in Morden Hall Park and brought into its animal hospital on Merton High Street in Merton.

The adult male reptile, thought to be between three and five years old, was chipped, and registered to a French company.

The find comes three days after a royal python was found three miles away on Tooting Common.

Tegus are an omnivorous species which live in tropical rain forests and deserts of east and central South America. They are capable of running at high speeds and can run bi-pedally for short distances.

If threatened they can whip their tails to swipe at aggressors and can even charge and inflict a painful bite. They often use this method in territorial defence, with the mouth open and front legs held wide to look more threatening.

Adult males are much larger than the females and can grow to lengths of nearly five feet.

Elise Smith, deputy nurse manager at Blue Cross Merton, said: “It’s very rare that we get reptiles handed into us, we’ve certainly never seen anything as large as this. We were not sure what it was at first. It’s the first tegu we’ve seen here at Merton. It’s lucky to be alive given the recent bitterly cold weather.

“We understand that people’s circumstances can change and would always urge pet owners to reach out to their nearest animal charity for help if they are struggling with a pet rather than abandoning them to fend for themselves.”

Blue Cross generally treats cats, dogs, small animals such as rabbits and guinea pigs at their animal hospitals. When other species and wildlife are brought in then the team will provide emergency care if needed but will then contact local organisations with more specialist expertise to take on the animal.

Luckily the tegu has found an experienced home with Harry Craft, a reptile expert who was recommended to Blue Cross by the exotics team at the Royal Veterinary College.

Mr Craft, who is studying Veterinary Medicine at the Royal Veterinary College, said: “I’m currently treating the tegu with an injection as he has a respiratory infection. If left without treatment, the infection could have proved fatal but he is making a good recovery.

“It’s clear that he hasn’t been fed the correct diet which has led to him being overweight.

“Tegus, like any reptile, require expert care and if they are not handled regularly, they can show aggressive behaviour. If upset or stressed they will start to make a huffing sound before whipping their tail. A tegu can charge and inflict a painful and damaging bite, strong enough to take off a finger.

“Exotic animals have extremely complex welfare needs which are very difficult, if not impossible, to meet in the home environment. For the inexperienced, it can be difficult to care for many of these animals in a domestic environment and as a result the animals’ welfare can suffer and members of the public put at risk.”

Blue Cross would advise people against getting an exotic pet and have reissued their call on the Government to review exotic pet regulations.

A report carried out by the pet charity in 2016 found tens of thousands of exotic animals easily available online for sale. Particular concerns the report uncovered were the many adverts not properly identifying the species for sale, a lack of any advice on the animals’ history or how to care for them and sellers not even being required to state whether an animal is appropriate to be kept as a pet.

Steve Goody, Blue Cross Deputy Chief Executive, said: “We would never suggest buying exotic pets, as it can be difficult to meet their welfare needs in a home environment.

“Unfortunately, it is far too easy to buy tegus and other reptiles online and many people do so without realising the amount of care and commitment they need.

“We would like the government to commit to a proper review of the regulations surrounding the breeding, sale and keeping of exotic pets.”

One thought on “Dangerous four-foot lizard dumped in Morden”