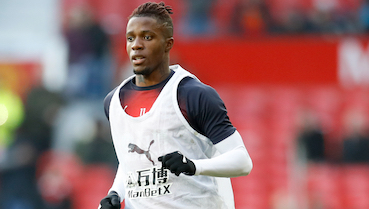 The pair, whose earlier careers have seen them largely play on the wing, have been pushed into the middle to spearhead the Eagles attack in the absence of Christian Benteke and Connor Wickham.

Alexander Sorloth and Jordan Ayew have not cut it when played there.

Townsend produced a sublime hit against Burnley to move on to four goals for Palace. Zaha tormented the Clarets and was hugely unlucky with a shot that hit the crossbar.

Hodgson, when asked about the pairing, said: “Initially it was forced upon us, with injuries, and we didn’t really have anyone to put in there. There was an injury to Benteke. Wickham wasn’t ready. By that time I hadn’t signed Sorloth or Ayew, so they had to play up front, those two. That’s what we had.

“Since that moment in time he [Townsend] has shown what a good centre-forward partnership he can have with Wilf. Even though I’ve got Sorloth and Jordan Ayew now, I can decide to play those two as forwards because they create other problems for the defence.

“It was all [but a goal for Zaha]. It was an excellent performance. I think Wilf is a striker. Wingers, if they have got the technical ability, strength and pace of people like Wilf Zaha can quite easily play central. There have been so many examples of that down the years.

“It is wrong to just brand people. Sometimes you can lose a lot of qualities that Wilf has and can cause defences by pigeon-holing him on to one wing or another where he’s a bit more reliant on people to get the ball to him.

“He’s always been a striker but the ability to use him centrally, like Andros, gives them a slightly better opportunity to score goals and take advantage of shooting opportunities.”

Meyer has started five Premier League matches for Palace and has completed back-to-back 90 minutes in the last two.

“He’s getting better and better,” said Hodgson. “Max has had to adjust to a four-man midfield and two men up front. To be able to marry together the attacking and defensive sides of the game, to find a position where he can exercise his skills without necessarily being bullied out of the game was a bit of a worry – for all players of his type in central areas.

“It’s been very good he has come to terms with the way we want him to play and good we’ve been able to find a position where we get the best out of him in terms of his attacking and defensive play. He’s quite happy to defend. He’s not the type of powerful defender in central areas like Luka [Milivojevic] and Cheikhou [Kouyate] can be, because they are six or seven inches taller.

“His last two or three performances have been good and he’s built up to that. He has done it in the shadows at times, playing for teams against Dulwich Hamlet and League Cup games – West Brom, Swansea and Middlesbrough. He has built up to this really. We’re getting more and more faith in him being able to handle the physicality and all that comes with Premier League football.

“He has built confidence that his technique and talent can see him through this and help the team win matches.”