A sensational ending at the Etihad Stadium saw Crystal Palace earn a point against Manchester City.

It initially seemed the Eagles might repeat their shock victory from last season after Cenk Tosun headed in his first goal for the club six minutes before half-time.

Sergio Aguero scored twice inside the final 10 minutes to turn the game around. But the South Londoners responded when Wilfried Zaha’s cross was diverted in by Fernandinho with fewer than two minutes remaining.

The hosts inevitably started the stronger side and James McArthur had to block an Aguero effort from close range. Kevin De Bruyne then crashed the underside of the crossbar with a 25-yard free kick. 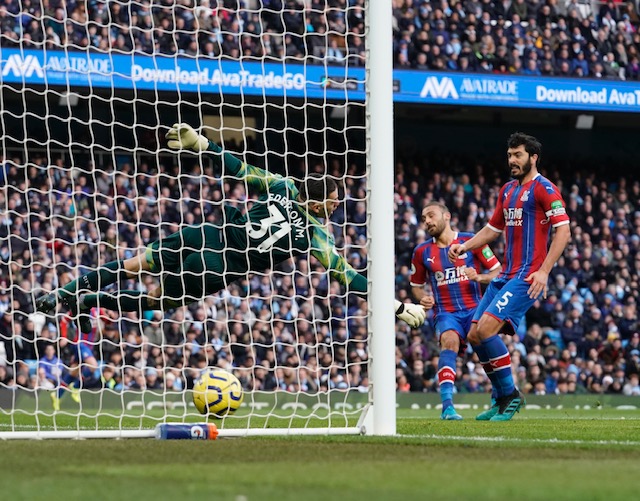 It was a penalty by Luka Milivojevic which sealed that 3-2 victory at the Eithad last season, and Zaha felt he should have had a spot-kick when he was felled by John Stones midway through the first half. Referee Graham Scott was unmoved.

But Palace soon led on 39 minutes – and it was the full debutant Tosun who scored the goal. James McCarthy’s set piece was headed down by Gary Cahill and the Turk finished clinically.

The loanee then thought he had another soon after when he slotted beyond Ederson but Scott had awarded Man City a free kick in the build up.

Vicente Guaita made an excellent save to deny Bernardo Silva as Pep Guardiola’s side continued to dominate early in the second half. However, Palace generally seemed comfortable dealing with the onslaught.

And Zaha perhaps should have done better when presented with the opportunity to double Palace’s lead, but Ederson saved his effort after the winger burst through City’s defence. At the other end, substitute Gabriel Jesus scuffed a great chance high and wide just moments after coming on. 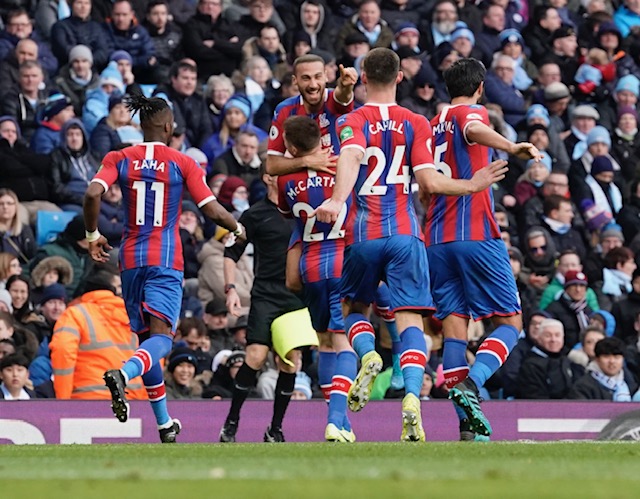 It then seemed Guardiola’s side might finally equalise when they were awarded a penalty on 71 minutes. However, VAR overruled Scott’s on-field decision on the basis of the ball striking Jairo Riedewald’s knee before ricocheting off the Dutchman’s arm.

But they did eventually draw level eight minutes from time. A wonderful assist by Jesus was finished by Aguero.

And the Argentine completed the comeback a few minutes later – heading in Benjamin Mendy’s cross.

However, there was to be another twist. Zaha raced away down the left and attempted to cross for substitute Connor Wickham – but Fernandinho reached the ball before the striker, turning it into the net to earn Palace a point.