Fans and players have been left devastated after burglars ransacked a football club twice within two days – damaging changing rooms young volunteers had built only four months ago.

Thieves broke into South Norwood’s Croydon Football Club, based on Albert Road, in the early hours of yesterday, Thursday March 7, and for a second time last night.

The club are fighting to get the club in order ahead of tomorrow’s match against Tunbridge Wells’ Rusthall Football Club.

Staff walked into the clubhouse on Thursday morning to find thousands of pounds worth of laptops, cash, stock and priceless club memorabilia had been stolen.

She said: “Sickening to see this happen again. Have spoken with the club and will be pressing @MPSCroydon to increase presence in the area and identify the criminals responsible. Please do support the club at this difficult time if you can.”

The club’s charity partner Kinetic Foundation tweeted after the first incident: “@Croydon_FC is devastated to announce the club has been ransacked and burgled overnight. Estimated thousands of losses. Community needs to come together to help. We work tirelessly hard to help young people in our community and they continue to be effected.”

A brick was smashed through the door in the second burglary causing significant damage to the clubhouse. 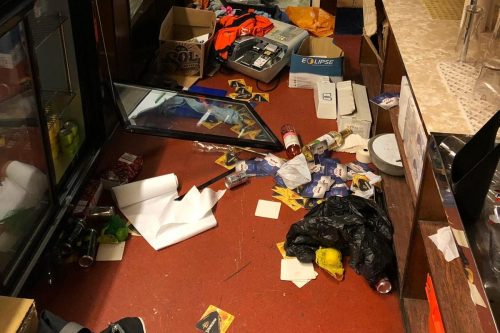 Croydon FC tweeted today: “A second night of trouble at the Arena with the same group coming back for more. Working tirelessly around the clock for clean up with @Kinetic_Coach ahead of tomorrow’s game v @FcRusthall. Thanks for all your local support and thanks to @MPSSouthNorwood. CCTV being analysed.”

Croydon FC have set up a Go Fund Me page where the public can donate to help the club rebuild what has been lost.

Croydon Metropolitan Police tweeted today: “#Croydon police are investigating 2 burglaries that have targeted #SouthNorwood community sporting facilities over the last 2 days. If you have information call 101 or anonymously on Crimestoppers 0800555111.”