A couple who attempted to smuggle almost 12 kilos of cocaine hidden in the linings of handbags have been jailed for a total of 11 years and five months following a National Crime Agency investigation.

Italian national Davide Fasano, 31, from East Dulwich and his 25-year-old Spanish girlfriend Tania Michelle Cedeno-Piguave, arrived into the UK on a flight from the Caribbean island of Aruba with £1.2 million worth of the Class A drug.

They were sentenced at the Old Bailey. Both pleaded guilty to the importation of a controlled drug.

The pair were stopped at Gatwick Airport by Border Force officers on July 6, 2018, after they arrived from Aruba, where they had been on a week-long holiday. 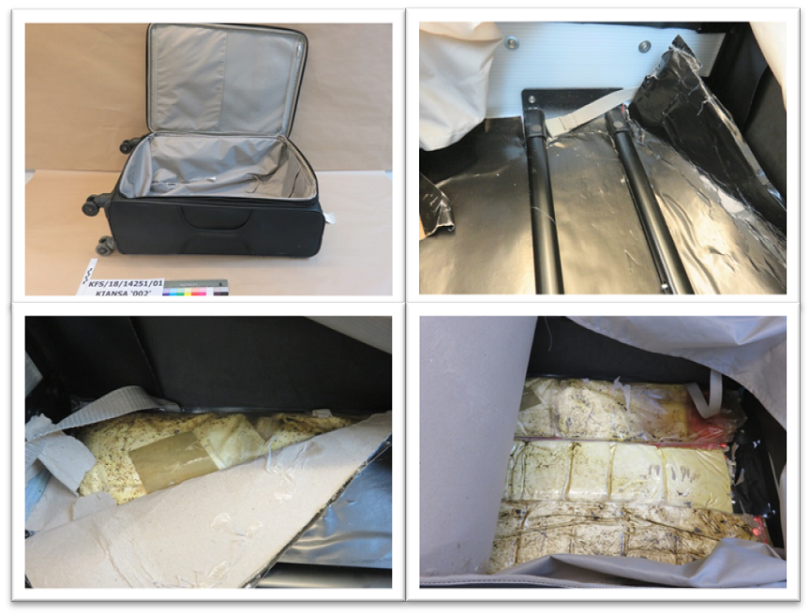 A sniffer dog indicated there was something inside Fasano’s suitcase. A search by officers revealed only a small amount of clothing but five new handbags inside. The cocaine was hidden inside a false bottom of the suitcase and the linings of the handbags.

They were then both arrested and cautioned by Border Force officers on suspicion of being involved in the importation of a controlled drug.

When subsequently questioned by NCA investigators, both denied any knowledge of the drugs hidden in the luggage. Fasano claimed he had found the suitcase at a bus stop outside the hotel in Aruba. He said he took it for his girlfriend Cedeno-Piguave as hers had ‘broken’.

When Fasano was asked by investigators why the suitcase was at a bus stop, he couldn’t give an explanation. He then said: “I’m not stupid, I wouldn’t travel 10,000 km carrying cocaine”.
Both were charged and remanded in custody.

Further enquiries by NCA officers revealed thousands of Whatsapp messages written in English, Spanish and Italian. Amongst the messages investigators found a conversation relating to Fasano paying Cedeno-Piguave £3,000 to accompany him to Aruba, and Cedeno-Piguave stating that it “would be dangerous”.

Steve McIntyre, NCA Branch Commander, Heathrow and Gatwick, said: “The importation of Class A drugs such as cocaine fuel further crime and violence which cause misery and exploitation of others. Fasano and Cedeno-Piguave were reckless in attempting to smuggle drugs into the UK.

“Working with our Border Force colleagues we will target anyone who tries to undermine the security of the UK border by smuggling illegal drugs and protect the public from the inevitable harm this causes.”

Tim Kingsberry, Director of Border Force South, said: “This is another excellent example of Border Force officers preventing a substantial quantity of drugs, with an estimated street level value of around £1.2 million from ending up on the streets of the UK, where they cause significant harm to both individuals and communities.

“Working with our colleagues at the National Crime Agency (NCA) we are determined to do all we can to stop drug traffickers and ensure that those who involve themselves in this activity face the full consequences of their crimes.”