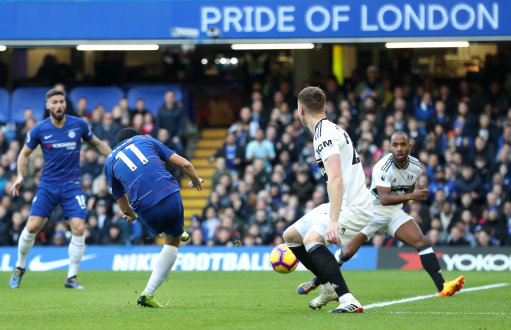 Pedro and Ruben Loftus-Cheek produced two sublime pieces of finishing to see off rugged, organised but ultimately goal-shy Fulham, 2-0 at Stamford Bridge this afternoon to leapfrog Spurs into third place in the Premier League.

This was no vintage Chelsea performance, Fulham under ex-Blues’ his Claudio Rainieri produced a workmanlike game, that will hopefully produce d enough points to stay in the division.

They remain rooted at the bottom of the table with just eight points and need to go on a run of winning matches if they are to have a chance to escape relegation.

Fulham started well, pinning the home side back and frustrating them with their high tempo and pressing game.

But with the Blues first attack, they scored on five minutes.

A smart counter-attack saw N’Golo Kante dispossess Hearn Michael Sarri in midfield, race clear and  slip the ball to Pedro, on the right.

The Spain wide man took two touches inside the Fulham penalty area before dispatching a low, curling left-footer beyond, Sergio Rico and the ball nestled into the back of his net.

Fulham, to their credit, continued to try and play constructive football. And on 16 minutes, Calum Chambers had a free thumper on goal. Kepa was well placed to snaffle the shot.

Pedro had the first chance of the second half, but his mazy run and left-footer from the edge of the Fulham penalty area was not powerful enough just to trouble Rico.

Kepa produced a brilliant save on his goal line, on 54 minutes thwarting Chambers’ powerful downward header from a corner.

Chambers was once again Fulham’s most dangerous player, thrashing a blistering right-footer that Kepa did well to parry away from goal on 66 minutes.

Morata’s first chance, well it’s something he will want to forget, he sent the ball into row Z of the Matthew Harding stand – missing an open goal from six yards out.

Sarri’s third change saw right back defender Davide Zappacosta replace ineffectual Alonso with 12 minutes left. Azpilicueta moved across to left-back. Chelsea were no where near their best, but in Loftus-Cheek they have a Rolls Royce of a player and he slotted home the second goal with eight minutes left on the clock – interchanging with Eden Hazard to find space and stroke the ball cooly past Rico.