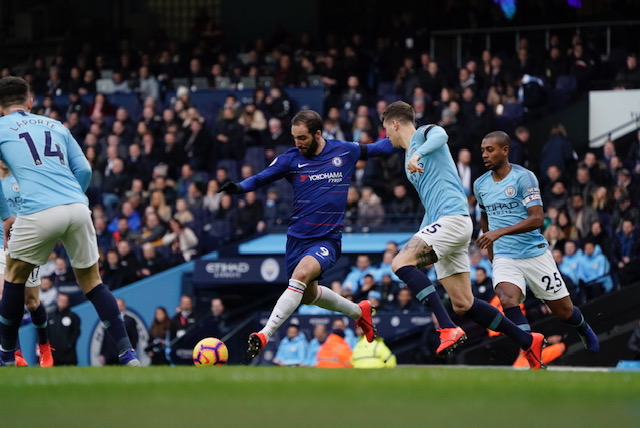 Chelsea suffered the humiliation of their worst Premier League defeat as they were thrashed 6-0 by champions Manchester City this afternoon at the Etihad.

After the humbling 4-0 defeat at Bournemouth a couple of weeks ago, no one expected the Blues to be smacked so savagely by City yet they were.

As a consequence, Chelsea are now sixth replaced in the Champions League qualification position by a resurgent Manchester Untied with Arsenal ahead of them goals scored.

It took the home side just three minutes to open the scoring Bernardo Silva was inexplicably left alone at a free kick. He raced into the Chelsea penalty area on the right. His cross took a slight deflection but fell at the right boot of in-running Raheem Sterling and the striker lashed the ball into the back of the Chelsea net.

Sergio Aguero missed a sitter on eight minutes when he was free at the far post, two feet from goal, yet somehow conspired to shoot wide.

But if he was to make up form the howler, it’s best to do it spectacularly, and that’s just what he did on 13 minutes with a beauty of a 25-yard curlier that Kepa Arrizabalaga did well to get his finger-tips to. But power of the effort saw the ball crash into the back of his net to double the lead.

City scored their third when inexplicably Ross Barkley opted to head back towards his own goal. Aguero gleefully tool advantage and screwed the ball home from six yards out on 18 minutes.

The misery was compounded when Ilkay Gundogan smashed home number four on 25 minutes as the Chelsea defence capitulated and fell apart like a collapsing house of cards.

Emerson made a fine save from Pedro on 28 minutes, deflecting away a blow, left-footer.

Gonzalo Higuain showed why he is a class striker by half volleying a venomous 25-yarder that saw Emerson tip the goal-bound bullet over his crossbar on 38 minutes.

Up stepped Aguero who sent Kepa the wrong way to notch up his hat-trick and City’s fifth.

Sarri’s response was to bring on another midfielder Ruben Loftus-Cheek. Pedro came off.

A five-nil down, Sarri opted to bring on left-back Emerson for Marcos Alonso. With 18 minutes left on the clock.

The humiliation was complete on 80 minutes when Sterling had the simplest of chances to slot home within a defeat left-footer from eight yards after the Chelsea defence was cut apart once again.