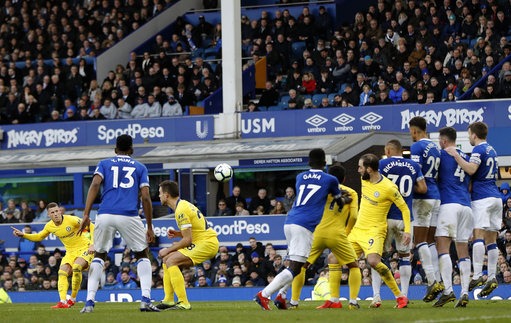 Chelsea have thrown five crucial Premier League points away in the past two games which have thrown their qualification for Champions League football into disarray and reignited the pressure on head coach Maurizio Sarri.

This humbling 2-0 defeat to Everton at Goodison Park this afternoon leaves Chelsea in sixth place.

Had they beaten Wolves last week rather than snatching a last-gasp equaliser and a point from Eden Hazard strike, at home, and won today, which from their first half showing, they should have, then the Blues would be sitting pretty in third place.

They missed several gilt-edged first half efforts and had an array of half-chances. But none went in.

Sarri cannot claim that his charges were tired from their 5-0 hammering of Dynamo Kiev on Thursday night.

He made seven changes for the visit to the North West.

However Chelsea made a bright start and an Eden Hazard inspired set of counter attacks saw Jordan Pickford make a fine save from the Belgium before watching the ball zip past him as the midfielder  arrowed another effort goal-bound. This time, on six minutes, the ball bounced off the foot of Pickford’s left upright.

Everton had their first chance on 17 minutes but Dominic Calvert-Lewis thrashed his effort high over Kepa Arrizabalaga’s crossbar.

Jorginho was next up to have a crack and his daisy-cutter on 20 minutes, was right on target, powerful but well held by Pickford.

He was quickly followed by the home side’s Andre Gomes – his left-footer from just outside the Chelsea penalty area saw Kepa mishandle the ball, but he managed to snaffle it on the second attempt.

Pedro should have put the Londoners ahead on 31 minutes but the Spain, wide-man screwed his effort well wonderful of goal.

A wonderful free kick by Gylfi Sigurdsson went straight to the head of Calvert-Lewis’s, but the striker headed inches over Kepa’s crossbar on 37 minutes.

Everton must have had a rocket of a telling off by boss Marco Silva at half-time as they put more effort into the first 60 seconds of the restart than they had they previous 45 minutes. Kepa was forced to make a fine save from Gomes as the home side went for the jugular.

And they did – from a Sigurdsson corner Kepa a made another save from the head of Calvert-Lewin but Richarlison was on hand to head the ball past the Chelsea stopper to give Everton the lead  on 48 minutes.

The visitors were rattled for 10 minutes and lucky not to go further behind.

One lone foray upfield by the Londoners saw Gonzalo Higuain try a  drive from outside the Everton penalty area. It was blistering and Pickford brilliantly parried to away to safety.

Sarri decided he had seen enough and opted to make a double substitution – Olivier Giroud and Ruben Loftus-Cheek replaced Higuain and Barkley on 65 minutes.

Richarlison earned a penalty when Alonso was late in a challenge on the Brazilian on 72 minutes. Up stepped Sigurdsson whose shot was well saved by Kepa but he cooly slotted home the ball as it spun invitingly back into his path.

Sarri then went for youth to solve his problems, – Jorginho came off as Callum Hudson-Odoi entered the fray with 15 minutes left.

Butr it made little to no difference.