Josh Parker knows there is a pressure to fill the scoring boots of Karlan Grant – and he is not fazed by that challenge following the trials and tribulations of his career.

The 28-year-old forward was a deadline-day signing by Charlton. The Slough-born attacker, who bagged 18 goals in 89 matches for Gillingham, penned a permanent deal until the end of the season.

With the Addicks failing to complete loan deals for Mo Eisa and Erhun Oztumer, it’s down to Parker
to strike up a partnership with Lyle Taylor in the remainder of the campaign.

Grant netted 14 times in the first six months of the season, leading to Huddersfield putting together a deal thought to be in the region of £2million.

“I think we’ll complement each other’s games,” said Parker. “I’ve seen Lyle play, I know what his strengths are and what he can do to benefit me.

“I think I can grow to learn what benefits him. Karlan’s gone and they had an unbelievable relationship, on and off the field. Goals are hard to come by, but those two had it in abundance – they kind of propelled the team to where it is now.

“It is down to me to do what I can and replace the goals that they’ve lost in terms of Karlan going to Huddersfield.”

Parker had four goals in 21 matches for the Gills this season. He missed three League One fixtures as he was away on international duty with Antigua and Barbuda. 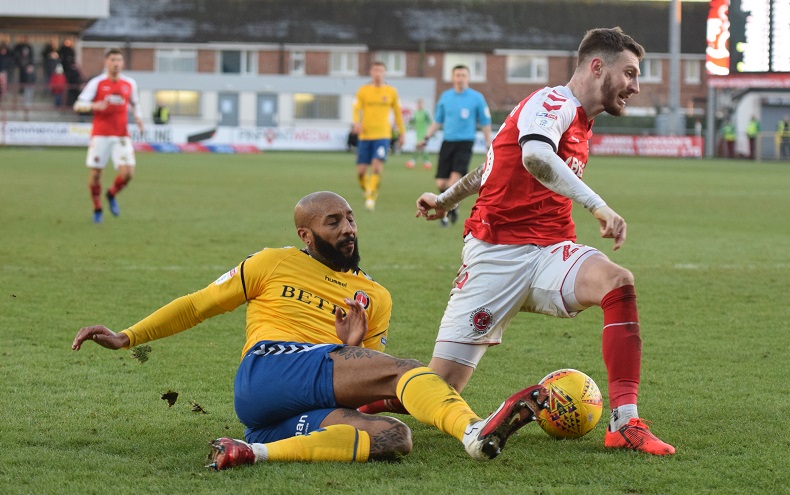 He readily accepts the pressure of needing to hit the ground running.

“That’s to be expected at teams like Charlton,” said Parker. “Whatever time of the season you join then you are expected to score a lot of goals, because this team wants to be at the top end of the table.

“If you are playing for a smaller team which doesn’t win the majority of their games then you’re happy if you get eight or nine goals – but here they are looking for 15 or 20, it’s standard procedure.
“That’s not any pressure on me, because that’s my job.

“I’ve been at Red Star Belgrade, where the fans are the most demanding in the world. It’s not a new challenge or obstacle, it’s just what I’ve got to do.

“It [Red Star] was an amazing experience, but also the worst at the same time.

Parker’s story is an unbelievable one.

His European adventure started when he signed for Slovenian club Domzale in June 2013. Then came a two-year deal with Red Star – where the nightmare began.

Parker can pinpoint when he hit rock bottom.

“It was after I came back from my loan at Aberdeen [in January 2016] and they basically stopped paying me,” he said. “I was unable to afford accommodation, or flights for my partner and son.

“I was training alone and with no equipment, no balls or cones – the standard stuff that makes you feel like a football player.

“They trained at night and I would be on a pitch where the floodlights were off.

I was doing that every day, without failure, because if I didn’t it would be seen as breach of contract. I had to do it to uphold my job description as a football player.”

Parker was left living in a dirt-cheap Belgrade hotel and secretly filmed his manager – hiding his phone in a football boot – claiming club politics prevented him being selected.

Even his exit was acrimonious. Red Star retained his international transfer papers and he began to work in a coffee shop back in the UK, believing his professional career could be over.

“When you are out of that situation you think it wasn’t that hard,” said Parker. “But at the time I was in a bad way.

I can laugh now, because I made a way out of it, but someone else might have chosen a different response. It was basically torture. The way they treated me was very, very bad.

“They prevented me earning a living and I had nine months with no income. I had clubs who wanted to sign me and a daughter on the way.

“The manager at Wealdstone asked if he could try and get my registration sorted. I told him he could try, but that three or four clubs had tried and been ignored. Then FIFA finally sorted it.”

A couple of weeks later and Parker signed for Gillingham in January 2017.

“When football is taken away from you, and you have no say, it makes you want it that little bit more,” he said.

“I actually would, because of the lifestyle and experience you can get,” said Parker, who is dad to Cairo, six, and Aieko, two.

“I was the first Brit to play in Slovenia and also in Serbia. It was about taking a risk – and usually you get rewarded.

“But the situation I was put in stopped me doing so.

Parker admits to a little shock that he was allowed to leave Gillingham.

“It was just over three hours before the window closed [that a move to Charlton became a possibility],” he said.

“I was surprised but I know I was very much valued at Gillingham, the manager made that very clear – he’d say publicly in the paper what I brought to the team.

“Of course [he’d like to earn longer deal with the Addicks]. The club is massive. In recent years they have always been one of the favourites to go up, they’ve maybe underachieved.

“You don’t think of Charlton as a League One team. I want to be a part of that transition into the Championship.

That’s the club’s ambition too. Put the two together and we should make good things happen.”