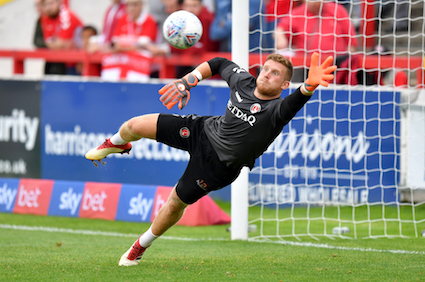 Dillon Phillips has set a target of at least 15 clean sheets this season if Charlton Athletic are going to be pushing at the right end of the League One table.

The Addicks were unspectacular in Saturday’s 0-0 draw with Fleetwood Town but it did allow the goalkeeper to record his first shutout of the 2018-19 campaign.

It was Charlton’s lack of finishing prowess at the other end of the pitch which ensured they never looked like turning one point into three.

Lee Bowyer’s side are 14th in the early standings and have not won in their last four outings in all competitions.

Phillips, who has retained the number one spot despite the loan signing of Jed Steer from Aston Villa, admitted the clash with the Cod Army was not a classic.

“It definitely won’t stay in the memory,” he said. “It wasn’t really what we wanted. We came for three points and we didn’t get that. There are going to be days like that, where we probably didn’t deserve much from the game. We had enough of the ball to create chances – but didn’t.

“It is the first clean sheet of the season and we need to thrive off that.

“Some of the goals we have conceded you can’t help, and some you can. But it is massive for a successful team – you need to keep clean sheets and are looking at 15 to 20 to have a good season.

“Hopefully that one kicks us off as a back five unit.”

Phillips is delighted to get his chance after playing understudy in the last two seasons to Ben Amos and Declan Rudd, brought in on loan from Bolton and Norwich respectively.

The academy product, 23, has been handed a crack at a first-team spot – crucial when he is in the final 12 months of his contract in SE7.

“It had been massively frustrating – horrible,” Phillips said about his waiting game. “No-one wants to sit there and be told you’re not ready, you’re too young – that is in whatever job you do.

“I’m grateful to get the chance but I don’t really have enough time to think about it, the games are coming thick and fast.

“Bowyer always told me he wanted to bring someone else through the door and it was down to me to keep the shirt. I said: ‘Bring in whoever  you want – I want to make myself the number one here and play as many games as I can’.

Charlton have failed to score in their last two matches and face a trip to Southend United – managed by ex-Addicks boss Chris Powell – on Saturday.

“The strikers want to score 20 goals each and we know that needs to be better,” said Phillips.

“But we also have to keep more than one clean sheet out of five games.

“We know it needs to be better in both boxes. We did one side on Saturday but couldn’t quite get it right at the other end. I signed my first professional contract under the gaffer [Powell] there [at Southend]. I have fond memories of him. I was a kid when we won the League One title, I watched from in the stands. Hopefully we can do something like that.”

Bowyer has been charged with misconduct by the FA – who claim his “behaviour on the field of play was deemed to be improper” during last week’s 1-0 defeat to Peterborough United. The Addicks boss was highly critical of referee James Linington in his post-match press conference. He has until Thursday to respond to the charge.