Caroline Dubois has no intentions of hanging around when she eventually makes the move into the professional ranks.

The 19-year-old South London boxer is hoping to turn pro off the back of one last success in the amateur game this summer in Tokyo. But despite her young age, Dubois has already considered her long-term future and when retirement comes she hopes her legacy will transcend just women’s boxing.

She is the sister of Greenwich heavyweight Daniel Dubois, who is one of the most exciting emerging talents in the domestic game.

He has won the British and Commonwealth titles and promoter Frank Warren is confident he will become a world champion within the next two years.

Caroline has lofty expectations for herself.

“I feel that if I end up going down as a good female boxer, then I’m not that good at all,” she said.

“If I go down as a good boxer, then I know I’ve achieved something.

“I plan to retire by the age of 27, and then settle down and have a family. That’s eight years to have a decent length career and see what I can do in that time. I want to go to the Olympics this summer, win the gold medal, and then I’ll definitely be looking to turn pro.

“I would have achieved everything I wanted to as an amateur by then. From a young age I said I wanted to be a boxer and to win gold medals, so to achieve all that is something not many people can say.

“The only thing left then is to do it as a pro, do things that people haven’t seen before. That will be the new challenge.”

Exposure for women’s boxing has significantly increased in recent years, with fighters such as Katie Taylor regularly featuring on major cards both sides of the Atlantic.

And Dubois hopes more boxers in the women’s game will leave behind the amateurs to create real competition at professional level.

“In the pro game the depth of women’s boxing isn’t that deep, especially compared to the amateurs,” she admitted. “But fighters like Katie Taylor, Nicola Adams, and Claressa Shields have definitely helped by turning pro. That’s been good for women’s boxing and creating opportunities that weren’t there before.

“Hopefully I can help continue that, encourage others to follow, and we can create something equal to the men’s game in terms of skill level.”

Dubois has won every one of her 40 fights as an amateur and has enjoyed success at all levels, including gold at the Youth Olympics in Buenos Aires in 2018.

Recognition out of the ring has followed and she was crowned BBC Young Sports Personality of the Year in November.

Dubois said: “To win that award was amazing because I’ve been training so hard. To get recognised by people who don’t really know me shows what level I’m at. 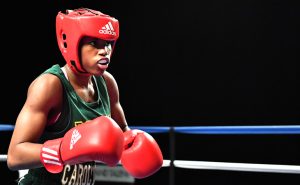 “The Youth Olympics was like a rehearsal for the real thing.

“Going out there, seeing all the others sports I would never normally watch and meeting the other athletes was the best part.

“The atmosphere and being part of Team GB was great.”

The teenager’s attention now turns to qualifying for the Tokyo Olympics this summer, with the qualifiers taking place at the Copper Box in London in March.

It had been planned for the qualifiers to take place last year, when Dubois would not have been old enough to compete, however governing issues forced them to be postponed and enabled the teenager to be eligible.

“The hardest part of the whole Olympic process is actually getting on the Great Britain team,” Dubois stated. “Making it to the Games and getting your foot through the door is so difficult.

“I may not have the experience of some other fighters, but in terms of boxing and ability I know I’m way up there and can compete against and beat any of them.”