Byron Webster has admitted he was so cut up about the end of his Millwall career that he did not even say proper farewells to many of the squad.

The 31-year-old Yorkshireman signed for Scunthorpe United last week. And the outpouring of praise from Lions fans – not always an easy crowd to please – spoke volumes of his contribution over the past five years.

“I’m no good at goodbyes,” Webster said. “It was hard and emotional. I only spoke to a couple of the boys, because it is not a good conversation really.

“I want to let things settle down and then we’ll catch up. It’s still a little raw.

“I loved my time at Millwall. There were ups and downs. The ups were fantastic and the downs weren’t the best. My kids grew up knowing me playing for Millwall – especially my little boy Henri. If you ask what team he supports he will say Millwall.

“My little girl has been in all the kits. My wife, kids and my mum and dad have loved it. Millwall is a big part of our lives.

“We were accepted. My brother went to a Sheffield away game and the Millwall fans could tell he was a Northerner.

He explained why he was there and got accepted straight away. The fans get such a bad rep but they shouldn’t – it’s just pure passion for the club.”

Webster was one of the respected senior players as Millwall won promotion back to the Championship in May 2017. 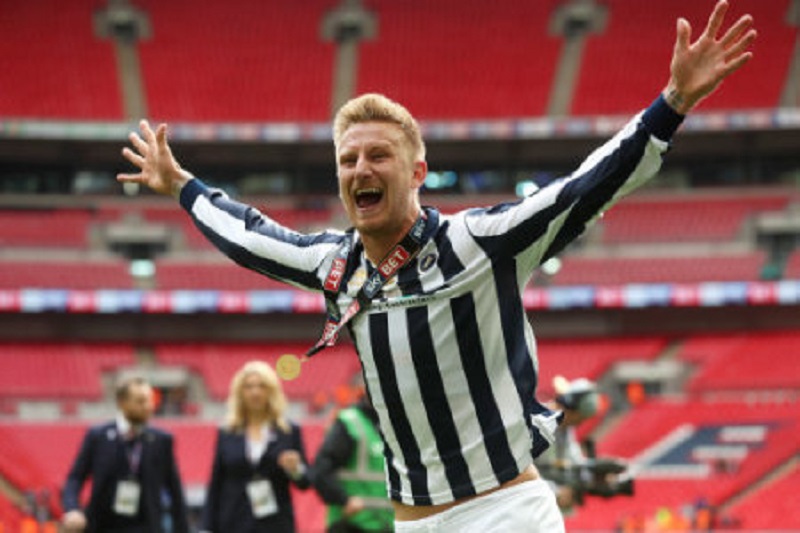 But disaster struck just four months later as he suffered major cruciate knee ligament damage against Barnsley at The Den.
He made his Championship return a year later – playing the full 90 minutes at West Bromwich Albion.

“The main highlight was winning at Wembley [in the League One play-off final],” said Webster.

“But also not starting the first game the next season against Forest, then getting in the team and having a good run until I got injured – I proved myself again.
“Another one was getting back from the injury. I put a lot of hours in with the medical staff.

The physio Paul Tanner and Laurence Bloom [head of performance] get the main credit. All the medical staff and sports science spent more time away from their families dealing with me.

“Playing against West Brom and Sheffield United was a big personal point.”

Webster lived with club captain Steve Morison when he was in the capital – his family moving back to their roots three years ago.
And he thinks the skipper has got an unfair public persona.

“Me and him are like peas and carrots – we get on so well,” he said. “Everyone always thinks I’m happy-go-lucky and he’s the miserable one. But Moro helped me on the pitch and off it when I was injured – he was my saviour. He could read me so well and tell when I was down. I owe him so much.”

When I call Webster he is settled down with Henri and daughter Amelie, aged five and eight, watching the film Jumanji. While the move to the Iron is pretty much ideal location-wise, he is at pains to address one misconception.

“It was frustrating to keep reading that I wanted to move up north because of my family,” said Webster, who played 137 times for the Lions.

“Me and my family made things work. I was at Millwall for five years and they weren’t down here for three of those.
“Me and my wife Katie are closer than we ever were.

“It is a massive bonus to be with my family – but it is the playing side that was key. Being away from them and not playing is rubbish. You are also training your socks off for nothing, because there is no end goal.

“Not playing on a Saturday meant I had to make a decision. I had to sit down with my dad, wife and agents to try and work out the best route on what to do. I believe going to Scunthorpe and hopefully playing games for them will kick me on for next season.”

Webster is on Instagram but does not have an account on Twitter, where a steady stream of praise headed his way when his stay in South London came to an end.

“I don’t do social media because there are comments there that can send you away with the fairies,” he explained. “They’ll make you think you are better than what you are. But also if you are reading negative ones it gives you a negative mindset.

“Even though I think I am mentally strong, I know for a fact it would affect me. If someone had written something nasty about me and my family then I’d get in trouble with the FA. I’d definitely react.

“There are a lot of youngsters on social media who say it doesn’t affect them, but I think it does for a lot of them.”

So does Webster think about ifs? If he hadn’t been sidelined and had such a long road to recovery last season? If Millwall had won promotion on their first visit to the national stadium instead of losing to Barnsley in May 2016?

“A little bit,” he said. “You think about those moments and wonder where would I be?  “But I think you’ve got to look back and also realise where you are now.

“I’ve had a great career at Millwall, I’ve got a good life, my kids are healthy and my wife is happy that I’m home.
“We’ve got a new dog [they own two – Bo and Ronnie]. It’s about trying to stay positive.

“The good thing is I got a lot of nice messages from Millwall fans and footballers in my team. I imagine if I go back to watch them I might even get a free ticket!”