Steve Morison left Millwall this week – but Byron Webster reckons he will be back.

The 35-year-old striker joined Shrewsbury Town on a season-long loan on Wednesday.

It looks as if Morison has kicked his last ball for Millwall as he will be out of contract next summer.

He played 335 games and scored 92 goals for the Lions and twice won promotion with them via the play-offs – including scoring the winner in the 2017 League One play-off final against Bradford City.

Former Lions centre-back Webster, a close pal of Morison, said: “He doesn’t just play football for money. He probably could’ve stayed there and been a bit-part, but he wants to play football still and that is a credit to him as a person.

Steve Morison – #Millwall's joint-fifth highest goalscorer of all-time and a true Lions legend – is leaving The Den to join @shrewsweb on loan for the 2019/20 season.

“I’ve always said from day one that I don’t think this is the last time you’ll see Moro at Millwall. I think he’ll be involved in the future there.

“I lived with him and got on with him really well. We still keep in contact, we’re in contact more enough every day.

“His appearances and goals make him a legend. But he is also a legend of a guy. People have a perception that he is miserable, but that isn’t the case. He is happy-go-lucky.

“I learned a lot from him on the pitch. You have got to do your job. You don’t care if people love you or don’t love you. You do your job – that’s him.

“I first met him at 29 and there were lessons I learned. If you are on the training pitch or at the stadium and you’re not doing your job then he’ll tell you, and it wasn’t always in a nice way! He is a professional – that is the biggest word I would use.

“What people don’t see is the day-to-day arguments and people having problems in their personal life. Whatever it is, he was always there.

“He had a relationship – not just with the manager but the chairman. He could speak to them.

“If some of the boys were tired he could go to the manager and say: ‘Look gaffer, the boys are tired’. The manager had respect for Moro, he had played with him and knew it wasn’t just a lie to get a day off – that it was genuine.

“For example he could tell the gaffer: ‘Byron is missing his family’.  And I might get an extra day off.

The General & Greggers what a partnership , iconic. Thanks for the memories gents 😢 https://t.co/hUvLDVN9Ey

“It’s not only what he produced on the pitch – he had that bridge. He could go to the management and say stuff that some people were scared to do.”

Millwall boss Neil Harris brought Morison back for a third spell with the SE16 outfit and he went on to net 19 times in the next two seasons in League One.

His role evolved following promotion to the Championship as he became more of a foil for Lee Gregory’s game.

“He is not a selfish player,” said Webster, whose five-year Millwall career was ended by a January move to Scunthorpe United. “People would say: ‘Moro hasn’t scored in x amount of games’. But it was his job – the work he did off the ball and the way he wound up defenders.

“He’d nod the ball down to Gregs. 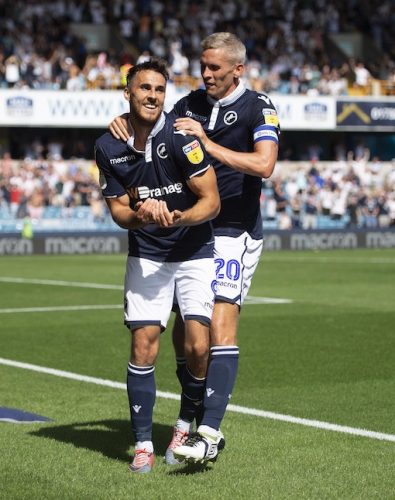 “It was funny because people were saying: ‘What is Moro doing?’. But Moro never changed, it was just peoples’ perceptions – because the team weren’t doing as well. In the year we got promoted he wasn’t top scorer, Greg’s was.

“As long as the team wins, he’s fantastic. If they are not then he’ll be a miserable so-and-so.

“I’ve worked with players who if they scored twice and the team lost 3-2 then they are happy. That ain’t him. If the team wins and he doesn’t score – happy days. He is the most professional and unselfish guy.

“I also need to say he is a great chef. He cooked some great food. He’ll always be remembered as a Millwall legend – and Byron’s chef.”

It is a changing of the guard up front with Gregory also leaving this summer. He will be confirmed as a Stoke City player after letting his Lions deal run down.

“The club knew what was going to happen with Gregs,” said Webster. “Hopefully the recruitment team is on that.

“There are massive changes. There are going to be a few more going, speaking to people, and a lot coming in. It is up to the gaffer, Livs [David Livermore, assistant manager], Ads [Adam Barrett, first-team coach] to work their magic and  get the team shaped up.

“It’s going to be a big turnover of people but there are a lot of leaders in the game. I’ve heard lots speak highly of Alex Pearce, so the gaffer has found a good one there.”