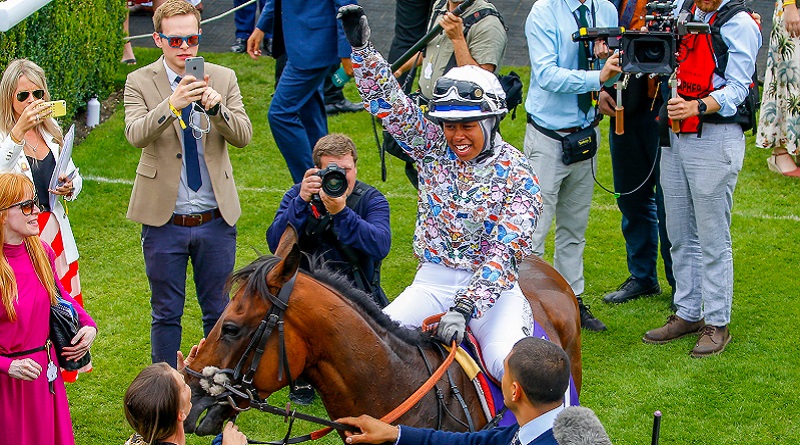 A South London teenager has become the first British Muslim jockey in the UK to win a race after landing the Magnolia Cup charity race on day three of the Qatar Goodwood Festival.

Khadijah Mellah, 18, from Peckham, remarkably beat a field of 11 other riders in the female-only charity race which included Olympian Victoria Pendleton and Vogue Williams.

She first learnt to ride at the charity Ebony Horse Club in Brixton, and her journey from South-east London to winning at one of the world’s most famous racecourses will be the subject of a documentary, Riding a Dream, which will air later this year.

Of her incredible and ground-breaking achievement, Khadijah said: “That was such an unbelievable experience.

It is just mind blowing to think that I was even in the same race as Victoria Pendleton, let alone to beat her and the rest of the women.

“Even in my wildest dreams I never imagined this could happen. I only sat on a racehorse a couple of months ago and I am just never going to forget this day.

“To be honest, I want to go back and do it all over again – what an incredible feeling.”

ITV Racing presenter Oli Bell, who is producing the film Riding a Dream, said: “That was completely and utterly amazing, I had my heart in my mouth the whole race. I can’t believe she’s done it and I couldn’t be prouder of Khadijah.

“We’ve been documenting her journey for the last six months and what she’s accomplished is nothing short of remarkable – it’s hard to overstate the extent of her achievement.

She’s been learning to race-ride whilst also having to take her A-levels and a large period of this process was during Ramadan, but she has taken it all in her stride, as was the case today in front of a massive crowd.

I hope that people will see what Khadijah has achieved and feel inspired. This is a significant moment, not just in racing but in the wider sporting world.”

Charlie Fellowes who trained Khadijah’s horse, Haverland, and with whom she has been based for much of her training, said: “Khadijah’s just a legend. I’ve never known anyone with so much focus and determination.

I’ll be honest, when she came to the yard probably six to eight weeks ago, I wasn’t sure that she would make it.

Racehorses are such highly strung animals and they are completely different to the horses that she will have ridden at Ebony Horse Club.

“But with every setback she has just worked harder. She’s turned up, put the hard hours in and she has done it.

I had a winner here earlier this week but seeing her cross the finishing line in first place is definitely up there with that. I am absolutely thrilled for her.”

David Fleming, Engagement Manager from the charity Ebony Horse Club. was on course with a group of 10 young riders from the club to watch Khadijah compete.

He said, “We all got a real kick out of watching Khadijah do so brilliantly today. It takes a special kind of person to do what she has done, and that’s why we put her forward to ride in the race and be in the documentary.

“Ebony Horse Club is a special place and we support 160 children and young people each week with horse-related activities.

To see one of our riders win at Goodwood is amazing, and hopefully more of them will want to get into racing after today.”

The documentary Riding a Dream has been funded by Great British Racing, Goodwood racecourse and the Racing Foundation as official partners.

It is directed by Mattia Reiniger and Tom Bolwell, and produced by Oli Bell and his brother Philip Bell.