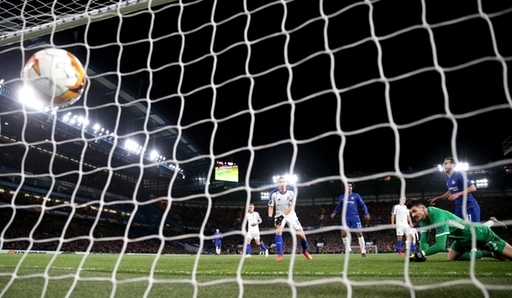 BY PAUL LAGAN at Stamford Bridge

Chelsea will take a heathy  3-0 lead to Ukraine next Thursday where they should progress to the quarter-final of the Europa League.

Goals from Pedro, spectacular free-kick from Willian and a excellent strike from substitute Calum Hudson-Odoi was enough for the Blues to see off Dynamo Kyiv at Stamford Bridge in the last 16, 1st leg match.

In truth, it was far from an exciting game – Chelsea have a far more important matter of league points at stake on Sunday when they face Wolves at homie in the Premier League.

They need all three points if they are to put pressure on the teams above them and secure at least fourth place.

The west Londoners dominated proceedings here apart from the odd flurry of pressure from Kyiv.

Chelsea dominated the opening exchanges without penetrating the Kyiv rearguard. Their goalkeeper Denys Boykin, gifted Pedro the ball on four minutes, with an unexpected mishit pass, but the Spain wide man was not sufficiently alert enough to take advantage.

But on 17 minutes, the Blues broke the deadlock. Started by Ross Barkley, the ball was fed to Pedro who raced into the Kyiv penalty area. he produced a lovely one-two with Olivier Giroud, the France striker gave the ball back with a deft back-heeler and Pedro slotted home from close range.

Pedro then proceeded to miss a sitter. Instead of smashing home, he shout, unchallenged straight at Boyko. The goalkeeper was soon in action again, on 25 minutes, this time thwarting Barkley’s  left footer.

david Luiz was sparing the ball around with style and aplomb, and on 34 minutes he sent Pedro clear – but once more the stopper was equal to the task and somehow managed to get to the attacker’s half-volley.

There were no changes at half-time by either side.

But that was soon to change. The Blues looked sleepy from the restart and head coach Maurizio Sarri noticed it and opted to bring on N’Golo kante and Ruben Loftus-Cheek on 62 minutes, off came Jorginho and Barkley.

Class told on 65 minutes when following a foul on Loftus-Cheek, up stepped Willian to produce a sublime free kick that sailed over the Kyiv wall and saw the ball arrow into the top right hand corner of Boyko net to double the score.

Calum Hudson-Odoi entered the fray with 13 minutes left on the clock.

With second left on the clock, Hudson-Odoi notched up number three. A sweeping attack started by Zappacosta, helped on by Pedro and a smooth clipped back heel from Loftus-Cheek set up in-running Hudson-Odoi who slotted home with a smart, curling right footer.