Barnet produced an incredible comeback as they recovered from a horrendous start to thrash a youthful Crystal Palace side at The Hive on Tuesday night.

Early goals from David Boateng and Connor Wickham looked to have set the Eagles on their way to their first victory of pre-season in 90 minutes, but the Bees replied six times in the final hour either side of the break to earn an impressive 6-2 victory against the South Londoners.

Having only recently returned from their tour of Switzerland, Palace manager Roy Hodgson opted to leave out the majority of the first-team players that made the trip. Stephen Henderson – making his first appearance in Palace colours since his switch from Nottingham Forest –  Jairo Reidewald, Alexander Sorloth and Wickham the only senior players on show for the Premier League side.

However, it took Crystal Palace just took minutes to break the deadlock. Sorloth produced a wonderful piece of skill in the middle of the pitch before picking out Boateng with a perfectly-weighted through pass, and he made no mistake, coolly thumping home from close-range. 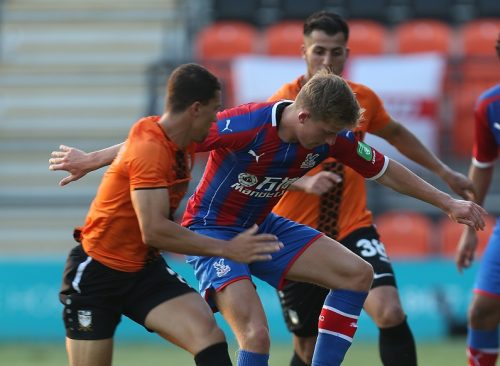 Barnet looked for an immediate response, but Jack Barham could only head Elliott Johnson’s left-wing cross narrowly wide of the post with what was their first effort of the evening, whilst Wickham put Flanagan in the clear up the other end with a delicious pass with the outside of his foot, but the teenager saw his low effort blocked by Loach from point-blank range.

The Bees had another chance to reduce the deficit on the half-hour mark, but Barham once again failed to take advantage of some lackluste Palace defending, heading straight at Henderson.

But 10 minutes later Darren Currie’s side did get themselves back into the contest as Mo Bettamer converted from the penalty spot after Ephron Mason-Clark was brought down by Ryan Inniss.

And Barnet were remarkably level less than 60 seconds later as Bettamer turned provider, squaring for Barham, who couldn’t miss from close-range.

The half-time whistle certainly didn’t stop the Bees in their tracks as just two minutes after the interval they completed the comeback. Substitute David Tutonda embarked on an excellent run down the left before arrowing a wonderful strike into the far corner, leaving Henderson grasping at thin air.

Palace should have levelled on 56 minutes, but after declining the chance to feed Wickham who was all alone to his left, Flanagan dragged his shot wide from just outside the box.

And just three minutes later that miss would prove costly as Barnet went 4-2 ahead. Antonis Vasiliou found himself in acres of space on the right and he crossed for Tutonda, who bagged his second of the game from close-range.

Barnet didn’t have to wait long for their fifth as 21 minutes from time as Simeon Akinola lashed home from inside the box, finishing off a fine flowing move from the hosts.

The Eagles, who travel to Nottingham Forest in their next pre-season match on Friday, came close to making it 5-3 late on, but Giovanni McGregor was denied by some sharp reflexes from Loach before their misery was complete as a Bees trialist slotted home their sixth with the final kick of an entertaining pre-season contest.