An archbishop who raised money for the refurbishment of an ageing cathedral died yesterday.

During Michael Bowen’s time as Archbishop he was able to have a successful appeal for a £5 million refurbishment for St George’s Cathedral.

Many high profile events took place there as a result, including concerts and graduations for the students of London South Bank University.

The money he raised helped secure the architectural features of the 171 year old building, much of which had been destroyed during the blitz in 1941.

When Pope John Paul II visited in 1982 on his six-day UK visit, it was Archbishop Michael who suggested the seven sacraments should be the theme of his trip.

As Archbishop he was able to reorganise secondary schools in South London and managed to create its first sixth form college. 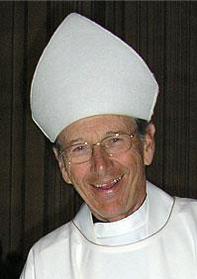 Britain’s highest-ranking Roman Catholic cleric, Cardinal Cormac Murphy-O’Connor, said: “He has been a true teacher and guide to his flock, a man who has led with certainty and humility, and served well the people and priests of his archdiocese.”

His other major contributions during 26 years in the post until 2003 were the challenge of implementing the reforms of the Second Vatican Council and introducing new structures for the Archdiocese of Southwark.

A statement from the diocese said: “He will be remembered both as a gentleman and a gentle man. He would always go out of his way to thank people after confirmations and parish visitations.”

Born in Gibraltar on April 23, 1930, he grew up in Wimbledon. He was educated at Downside School. When he was ten, his father, a major in the Army, was killed in action in Norway during the Second World War. His mother remarried in 1945,
to Sir Paul Makins.
He began his studies for the priesthood at the Venerable English College in Rome in 1952.
He gained theology and philosophy degrees from the Gregorian University and was
ordained in Rome on July 6, 1958.
His first post was as a curate to St Gregory’s, Earlsfield. In 1960 he moved to The English Martyrs, Walworth, where, in the evenings, he taught at St Augustine’s House, a hostel for working men who were thinking about the priesthood.
In 1963, with the Second Vatican Council under way, he returned to Rome to teach theology at the Beda College. He came back to England in 1966 to become Chancellor of the newly-established Diocese of Arundel and Brighton.

In 1970 he was consecrated coadjutor bishop for the diocese of Arundel and Brighton. The following year, on June 27, after the death of Bishop David Cashman, he was made the diocesan bishop.
As a result of the Second Vatican Council, the 1970s were marked by changes and new ideas in the Church.

He was involved in the decision to close Corpus Christi College, a national centre of religious education in Kensington, because of concerns over its interpretation of Catholic doctrine.
Along with Cardinal John Heenan, he represented the Bishops of England and Wales at the 1971 Synod of Bishops, which Pope Paul VI called to explore the twin themes of priesthood and justice and peace in the world. From 1972 to 1975 he was co-chairman of the Catholic/Methodist International Commission.
Following the death of Archbishop Cyril Cowderoy, he was appointed Archbishop and
Metropolitan of Southwark on April 23, 1977.
One of the first major decisions Archbishop Michael took was to divide the diocese into three pastoral areas, each with its own bishop. His plan, some years later, to split the Diocese into two, with Kent having its own cathedral, was rejected by the Holy See.
He appointed a Director of Diocesan Pastoral Renewal and, to provide the laity with a
greater voice, established a pastoral council in each of the 20 Southwark deaneries.

Throughout his life he enjoyed golf, tennis and cricket. He once played against the Duke of Norfolk XI at Arundel and – the story goes – got out legendary England batsman Colin Cowdrey.