AFC Wimbledon may have been hoping to build on last season’s final-day Great Escape from relegation this year but seasoned pro Anthony Wordsworth says another fraught campaign has come as no surprise to him.

The Dons achieved League One survival on the final day of last season after a serious upturn in form under Wally Downes.

And they are right in the thick of things at the wrong end of the table again this time around – 20th in the standings and just two points clear of the bottom three.

“Since [former manager] Wally Downes came in last year, based on our form since then I think we’d have been in the top ten,” said the 30-year-old midfielder. “We obviously had an ambition to get up into the top 10, top six at the start of the season but, if I’m being honest, I knew it was going to be another relegation scrap.

“I’ve been in this league long enough and I feel that the squad we had wasn’t strong enough to be competing for the top six.

“We’ve got a lot of young players that are, most of them, playing in their first full season in League One, so asking them to be going for the top six is a massive ask. We’ve got to be realistic and say that if we stay up again this season, it will be a massive, massive achievement. 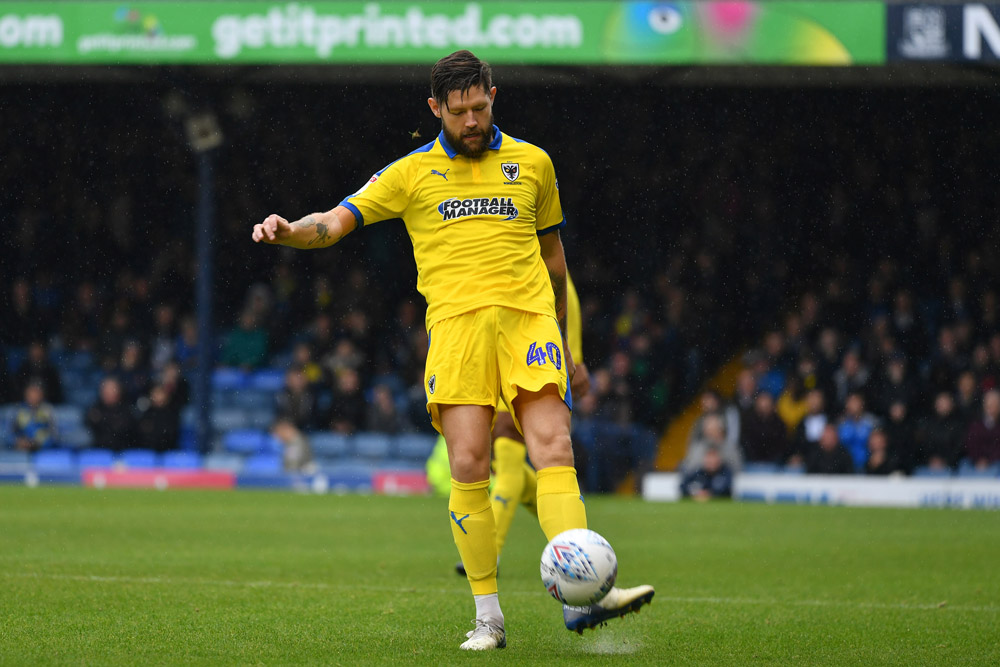 “We’ve got Nesta Guinness-Walker and Paul Osew, just to name two, who are playing their first full season of professional football.

“Come the last game of the season, if we stay up on goal difference like we did last time, I’d be happy with that.

“I’ve been in a lot of League One teams, good teams that should have got promotion, I’ve been with one team that won promotion – so I know what it takes to finish in the top six and get promoted. When I was looking around at the start of the season, this squad that we’ve got at the moment is a work in progress. I think it will be a really, really good side – maybe next season or the season after – when the players have more experience at this level.”

The Camden-born midfielder is hoping to resume his contribution at home to play-off chasing Peterborough United tomorrow, in a fixture which has resonance for him.

“Peterborough was my first game back from my last injury and I managed to score a goal,” said Wordsworth. “The second half we played at their place was probably the best 45 minutes I’ve seen from this team this season.

“We did really well but, unfortunately, we conceded a sloppy goal and ended up losing the game.”

Dons and Charlton youth team graduate Wordsworth was back in full training this week but his hopes to get a run-out in a friendly against a Crystal Palace XI on Tuesday were dashed by the weather.

A player who has turned out more than 300 times in the third tier for Wimbledon, Colchester, Crawley and Southend said he was confident the club has enough to repeat last season’s heroics, this time under Glyn Hodges.

“We can stay up and I’m pretty certain we will,” he added.

Wordsworth, whose AFC Wimbledon contract expires in the summer, was happy to explain why fans could be hopeful about the future.

“Look at Nesta Guinness-Walker, who we signed from Met Police,” he said. “In an ideal world you’d like to give him a year, or maybe two, in the U23s but the situation we’re in at the moment, we don’t even have an U23s. So he’s been thrown in at the deep end and asked to play pretty much the first 15 games of the season, with no League One experience whatsoever. So he’s only going to get better. Paul Osew is only going to get better. Paul Kalambayi is in only his second season of professional football. Max Sanders is in his first full season of professional football. I’m probably missing one or two. With more games under their belt, there will be big improvements next season.”

On the divisive issue of whether to accept outside investment to get the new Plough Lane stadium built and to give leeway to a manager of one of the tightest budgets in the division, Wordsworth gave a diplomatic response.

“As players we are aware of what’s going on,” he said. “I can understand the fans who don’t want outside investment, who want to keep it a fan-owned club. Obviously, being injured, I sit in the stand and communicate with the fans on Saturdays and a lot of them want the club to go to the next level, accept some investment and try and invest in the club.

“As a player, I can understand both sides and hopefully this stadium can get sorted and the club can move forward. There are a lot of clubs at this level who have got bigger budgets and they will obviously get the best players because they can attract goalscorers, creative midfielders and the best defenders. With our budget, we have to nick the odd player from non-league and take a gamble that they’re going to be any good.

“If we do stay up this season, it will be interesting to see what the club do and whether they accept outside investment. Obviously the new stadium will help attract players. If they have the money to bring top players in, I’d like to see the club try and get to the Championship.”

For the time being though, there is a more immediate target, with Wordsworth admitting the presence of Milton Keynes just above the Dons in the table is an added incentive to pick up points.