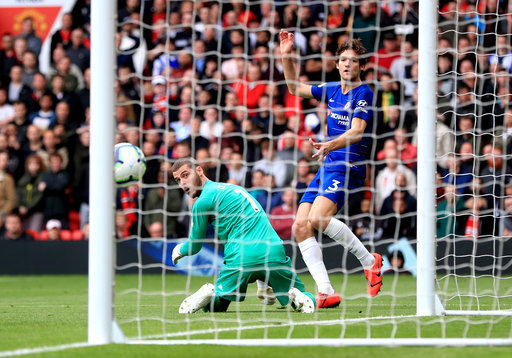 BY PAUL LAGAN at Old Trafford

Marcos Alonso scored a late, first half equaliser for Chelsea as the west Londoners drew 1-1 at Old Trafford against Manchester United this afternoon after ex-Blue Juan Mata put the home side ahead.

With Arsenal losing earlier in the day to Leicester, Chelsea are two points clear of their north London rivals in the coveted fourth spot in the Premier League.

United are not out of contention for an automatic Champions League spot with two matches to play, but of the two poor sides on display in the North-East, Chelsea look the more likely to nab the berth.

Technically this was not a great game. So many missed passes, and so few chances.

Man United’s had the first effort of the game, on four minutes. Luke Shaw pummelled a long pass to ex-Blue Romelu Lukaku. The Belgian striker raced clear on goal, but Antonio Rudiger managed to get goal-side of him, which delayed his shot, which well deflected off the leg of Kepa for a corner.

Chelsea went behind on 11 minutes where Shaw popped up the Chelsea  penalty area. Lukaku set him up beautifully with a deft clip. The full back then cut the ball back to in-running Juan Mata who sensing Kepa’s was out of his goal, reverse passed the ball into the net.

Azpilicueta spared Alonso’s blushes on 28 minutes when a cross into the six-yard box, was headed by Rudiger onto the back of the head of the Spain defender. Azpilicueta cleared for a corner, which Eric Bailly was inches away from netted number two, but his header zipped past Kepa’s left upright.

Despite improved possession from the visitors, there was little action on the United goal.

However it was a shocking error by United goalkeeper David De Gea which gave Chelsea the equaliser two minutes from the break and not  for the first time this season. He failed to hold onto a 20-yard rasper by Rudiger, and Alonso was on the six-yard spot, on an angle, but somehow cut the ball across De Gea and into the net off the far post.

There was no changes by either side at half time.

Marcus Rashford had the first effort of the restart, on 50 minutes  – a 25 yard free-kick that Kepa did well to dive to his left and snaffle the ball into his chest.

Willian and Mateo Kovacic were quickly book by referee Martin Atkinson.Rudiger’s game ended on 63 minutes when he was carried off following a challenge – Andreas Christensen was his replacement. united replaced Rashford with Alexis Sanchez.

A lovely dipping free-kick by Willian on 72 minutes was just inches over De Gea’s crossbar as both sides’ inability to take control of the game allowed each the occasional chance.

Ruben Loftus-Cheek entered the fray with 15 minutes to go, Kovacic the obvious man to be taken off.

Willian, who was clattered by Marcos Rojo minutes earlier limped off the pitch with seven min utes left on the clock – Pedro replaced him.

He was crucially on the goal-line as Rojo’s header was hacked away from goal deep into seven minutes of added time.