Wally Downes felt his AFC Wimbledon side had the chance to put themselves in a commanding lead – before defensive shortcomings saw them slip to a 4-2 defeat to Gillingham today.

The Dons had taken the lead through Michael Folivi’s second goal since arriving on loan from Watford.

But Gillingham were 3-1 ahead after 50 minutes. James Hanson’s header in injury time was only a consolation for the South Londoners.

Seven of the bottom eight teams in League One lost. Wimbledon are three points behind 20th place – effectively four as they have a significantly worse goal difference.

“If we had put a couple of other chances away earlier in the game then it might have been different,” said Downes, after watching the Dons’ four-game unbeaten start come to an end. “Getting two goals in two minutes was a body blow for us. It’s very difficult to come back from that. 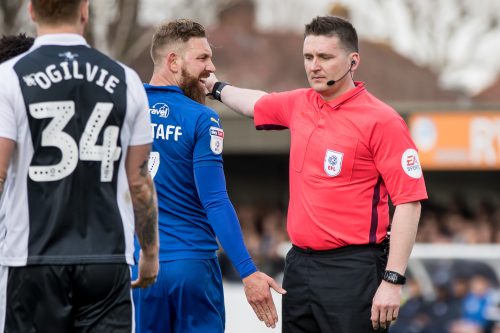 “[At half-time] I said I was confident we could go and win the game. For the first 43 minutes we played really well and then had two minutes where we played badly and got punished.

“I was confident we could win the second half, and if we won the second half we get a draw. But there was a lapse from a throw in, it was a very silly goal to give away. At 3-1 down then you have got a mountain to climb.”

Aaron Ramsdale had kept four clean sheets in a row but was badly at fault for Gillingham’s second – when Graham Burke’s shot squeezed under him.

But the on-loan Bournemouth man has been a star for Wimbledon in recent weeks and been impressive since arriving in January.

“Yeah he has [made a lot of important saves] and he’ll continue to do that,” said Downes. “They have scored four and that’s going to happen to him in his career again. It’s just another day in the office.

“Four clean sheets is terrific but this is a reminder that we’re not infallible. We’ve got to keep the underdog mentality and battle for every point we can get.”