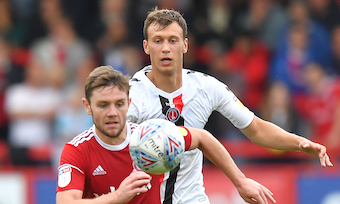 Accrington Stanley’s Sam Finley is facing a lengthy suspension after being charged with violent conduct – after TV cameras caught his stamp on the head of Charlton Athletic striker Lyle Taylor.

Taylor and Stanley goalkeeper Jonny Maxted were both dismissed following a goalmouth clash between both sets of players.

And Finley was clearly pictured racing onto the scene and putting his boot down on the head of the grounded Taylor.

They said: “It follows an incident in the 80th minute of Saturday’s game against Charlton Athletic on 19 January which was not seen by the match officials but caught on camera.

“It is alleged the standard punishment of three matches that would otherwise apply is clearly insufficient.

Taylor has already seen an appeal to overturn his red card rejected. But Accrington also appealed Maxted’s dismissal and that was overturned – meaning he is available to face Derby County in the FA Cup.