Molière is often called the French ‘Shakespeare.’ Directors often approach him in awe, and
productions lack life. No danger of that with John Donnelly’s version of “Tartuffe – the Impostor.”
There are some laughs, and a lot of smiles.

Donnelly has done a very good job of updating the piece for a 21st century audience. Not least by dispensing with Molière’s rhyming couplets (they sneak back in at the end, reminding us how glad we are of their absence). Instead of the opulent, corrupt, court of Louis XIV, the action is transposed to London – very much now. A luxurious house in Highgate – perfectly captured in Robert Jones’s gorgeous set.

As such, the character of Tartuffe is updated from a Churchy fraud of the 17th century, to a very contemporary, very “Zen”, life guru. I guess a kind of secular Buddhism has replaced Christianity among the Twitterati. ‘Namaste-ing’ away in his faded Ashram prints, Denis O’Hare sports the prayer beads very well, and is every bit as annoying as he is meant to be. Claiming spiritual superiority to worldly goods and temptations, but giving in to them all too easily. 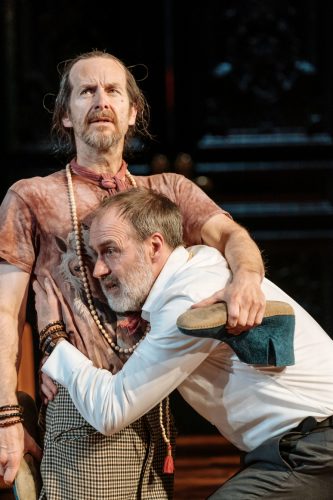 The plot concerns how this “Impostor” dupes politically connected plutocrat Orgon (played by Kevin Doyle) and his Mother Madame Pernelle (the wonderful Susan Engel). It takes all the effort and skill of Orgon’s household to make them wake up. Led by the Irish housekeeper, a jaunty Kathy Kiera Clarke, and the expensive second wife Elmire (Olivia Williams). Orgon’s children also get involved.
Kitty Archer embodies the ultimate ‘millennial’ Marianne well.
Donnelly reminds us Tartuffe is not just a romp. The play is very appropriate for this age. A time of fake news, and of unbridled “silo-ism” in thought. A time when we all need to question opinions and spins, and cling to hard evidence. Molière was writing in a similar climate. A post-Galileo world where the Church’s rigid teachings were being challenged. Laying the foundations for a new scientific age of reason.

So far so good. But comedy is one of the hardest things to get right. Laurence Olivier once cruelly observed that Molière was as funny as an “open Grave.” Measured against that benchmark this production has done well. Experienced comedians might have done even better.

The audience recognizes people they are used to making them laugh. Only Susan Engel at the beginning, and an excellent Geoffrey Lumb (as the overly “woke” poet Valere) really manage to take the audience with them.

Talking of overly woke, the weakest element of director Blanche McIntyre’s production is the clunky political ending. Maybe it is hard for modern audiences to swallow Molière’s finale – an awkward grovel to the Sun King. And I am sure there is much to be said (elsewhere) about police brutality and social injustice. But trying to turn Tartuffe into some sort of class warrior is a stretch.

Which is not to deny Tartuffe was controversial when it came out. It was banned. But by the Church, not the Government. ‘Molière’ is a pseudonym, assumed to spare his father the shame of having an actor in the family. The Church would not even bury actors on hallowed ground. This is the anger behind the comedy of Tartuffe.
Molière’s wife had him buried at night, in secret, in a corner of the cemetery. On the open grave question – I guess Molière has the last laugh.