A Bagpuss lookalike has been recovered in Croydon – from a bin.

The distinctive looking cat is thought to be around 12 years old and had no microchip.

She was looking saggy and traumatised by her ordeal, but wearing a plastic pink collar.

The cat – named Matilda – was found by refuse collectors in a large chest-height bin outside a block of flats in New Addington, Croydon on April 6.

The workers tried to find her owner but were unable to and a resident of the block of flats rang the RSPCA after getting concerned that she did not appear to move for a long time. 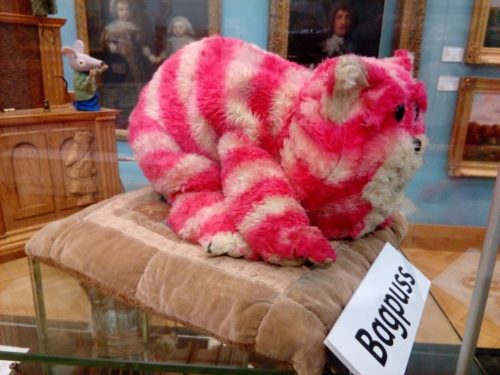 ACO Tom Goldsmith said: “We knocked on some doors but couldn’t find anyone that recognised this poor cat.

“She did have sticky eyes and seemed unwell so we took her to RSPCA Putney for a check-over.

“I think it’s unlikely she got into the bin herself because of the position and height of it, so sadly this may have been done deliberately.”

Jo Elmes, from RSPCA Putney, said: “As soon as we saw poor Matilda she reminded us of the much-loved childhood character Bagpuss. We can’t believe someone thought she was rubbish, she is such a sweet girl.

“She is doing really well here though so if no one comes forward hopefully we can find her a loving new home – although perhaps not with a woodpecker and some mice!”

As well as showing symptoms of cat flu, Matilda may also be suffering because of her breed. Persians are bred with extremely short, flat faces (known as brachycephalic) and as a result can experience health and welfare issues including breathing difficulties and problems with their tear ducts. RSPCA vets fear poor Matilda may always have problems with her eyes because of her breed.

If anyone recognises Matilda or knows how she came to be in the bin they can ring the RSPCA inspectorate appeal line on 0300 123 8018.

To help the RSPCA continue to carry out rescues like these please visit www.rspca.org.uk/give